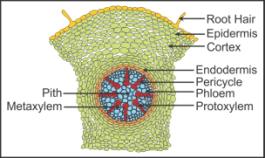 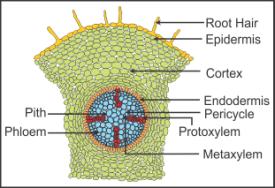 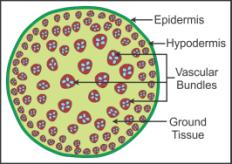 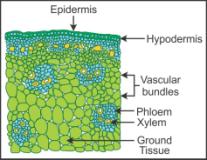 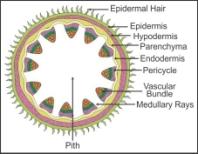 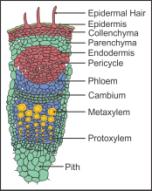 Spring wood and autumn wood: In temperate regions, the climatic conditions are not uniform through the year. In the spring season, the cambium is very active and produces a large number of xylary elements having vessels with wider cavities. The wood formed during this season is called spring wood or early wood. In winter, the cambium is less active and forms fewer xylary elements which have narrow vessels, and this wood is called autumn wood or late wood. The spring wood is lighter in colour and has a lower density, whereas the autumn wood is darker and has a higher density. The two kinds of woods which appear as alternate concentric rings constitute an annual ring. Annual rings seen in a cut stem give an estimate of the age of the tree.

Heartwood and sapwood: In old trees, the greater part of the secondary xylem is dark brown due to the deposition of organic compounds such as tannins, resins, oils, gums, aromatic substances and essential oils in the central or innermost layers of the stem. These substances make it hard, durable and resistant to the attacks of microorganisms and insects. This region comprises dead elements with highly lignified walls and is called heartwood. The heartwood does not conduct water, but it gives mechanical support to the stem. The peripheral region of the secondary xylem is lighter in colour and is known as sapwood. It is involved in the conduction of water and minerals from the roots to the leaves.

ii. Cork cambium: As the stem continues to increase in girth due to the activity of the vascular cambium, the outer cortical and epidermis layers get broken and need to be replaced to provide new protective cell layers. Hence, another meristematic tissue called cork cambium or phellogen develops in the cortex region.

The cells of the secondary cortex are parenchymatous. Phellogen, phellem, and phelloderm are collectively known as the periderm. Due to the activity of the cork cambium, pressure builds up on the remaining layers peripheral to the phellogen, and these layers ultimately die and slough off.

Bark is a non-technical term which refers to all tissues exterior to the vascular cambium, therefore including the secondary phloem. Bark refers to a number of tissue types, the periderm and the secondary phloem. Bark formed early in the season is called early or soft bark. Towards the end of the season, late or hard bark is formed. At certain regions, the phellogen cuts off closely arranged parenchymatous cells on the outer side instead of cork cells. These parenchymatous cells soon rupture the epidermis, forming lens-shaped openings called lenticels. Lenticels permit the exchange of gases between the outer atmosphere and the internal tissue of the stem. 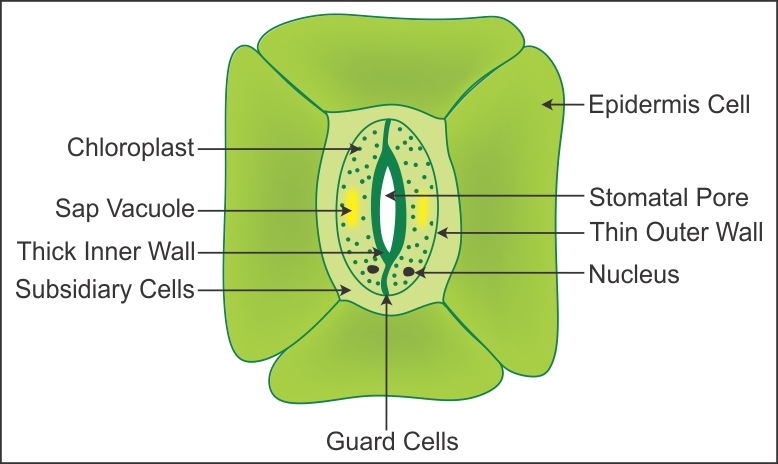 Yes. The cork cambium or phellogen is a secondary meristem which develops from the pericycle of the root and the hypodermal layer of the stem. As the stem continues to increase in girth due to the activity of the vascular cambium, the outer cortical and epidermis layers get broken and need to be replaced to provide new protective cell layers. Hence, sooner or later, another meristematic tissue called the cork cambium or phellogen develops, usually in the cortex region. The phellogen is a couple of layers thick. It is made of narrow, thin-walled and nearly rectangular cells. The phellogen cuts off cells on both sides. The outer cells differentiate into cork or phellem, while the inner cells differentiate into the secondary cortex or the phelloderm. This is how the cork cambium forms tissues which form the cork.

It is the transverse section of a monocot stem as the vascular bundles are scattered in monocot stems and the phloem parenchyma remains absent in it.

The xylem is formed of four types of cells - tracheids, vessels, xylem parenchyma and xylem fibres. All these cells coordinate together to conduct sap. The phloem is made up of four types of cells - sieve tubes, companion cells, phloem parenchyma and phloem fibres. These cells coordinate to conduct food to various parts of the plant.

The xylem and phloem are composed of several types of cells which work as a unit. Hence, they are called complex tissues.

On the basis of their structure and location, there are three types of tissue

iii. Vascular or conducting tissue system: It consists of vascular bundles which include phloem, xylem and vascular cambium.

The study of plant anatomy is useful in many ways:

i. To help us understand the way a plant functions by carrying out its routine activities such as transpiration, photosynthesis and growth and repair.

ii. To help botanists and agriculture scientists to understand the disease and cure for plants.

iv. Plants are important to maintain the ecological balance of the earth, so understanding plant anatomy is a way to understand the larger system of the ecology on this planet.

The periderm is a component of secondary growth which is formed towards the surface of stems and roots, having phellem, phellogen and phelloderm.

The stem continues to increase in girth due to the activity of the vascular cambium. The outer cortical and epidermal layers get broken and develop into another meristematic tissue called cork cambium or phellogen which develops in the cortex region. The phellogen is made of narrow, thin-walled and nearly rectangular cells. It cuts off cells on both sides. The outer cells differentiate into cork or phellem, while the inner cells differentiate into the secondary cortex or the phelloderm. The cork is impervious to water due to the deposition of suberin in the cell wall. The cells of the secondary cortex are parenchymatous.

At certain regions, the phellogen cuts off closely arranged parenchymatous cells on the outer side instead of cork cells and forms lenticels which permit the exchange of gases between the outer atmosphere and the internal tissue of the stem.

The vertical section of a dorsiventral leaf through the lamina shows three main parts-epidermis, mesophyll and vascular system.

i. Epidermis: The epidermis has two parts:

i. Upper or adaxial epidermis: It consists of a single layer of tightly packed rectangular parenchymatous cells which are devoid of chloroplasts. The inner walls of the epidermal cells are thin, whereas the outer walls are cutinised.

ii. The lower or abaxial epidermis bounds the leaf on the lower surface and bears stomata.

ii. Mesophyll: The tissue between the upper and the lower epidermis is called the mesophyll. The mesophyll possesses chloroplasts and carries out photosynthesis. It has two types of cells-palisade parenchyma and spongy parenchyma. The adaxially placed palisade parenchyma is made up of elongated cells which are arranged vertically and parallel to each other. The oval or round and loosely arranged spongy parenchyma is situated below the palisade cells and extends to the lower epidermis. 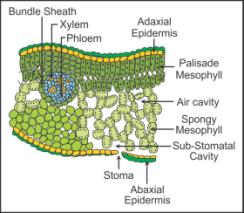 There are numerous large spaces and air cavities between these cells.

iii. Vascular system: It is made up of a number of vascular bundles of varying sizes depending on the venation. The vascular bundles are found at the boundary between the palisade and the spongy regions. Each vascular bundle is surrounded by a sheath of compactly arranged parenchyma cells called the bundle sheath. The xylem lies towards the upper side of the leaf, while the phloem is found towards the lower surface.