In CBSE Class 10, Physics is a combination of theoretical and practical knowledge. Physics can be one of the toughest subjects to understand. In the CBSE Class 10 Physics syllabus, there are crucial topics such as electricity, magnetic effects of electric current, refraction of light, etc. Through the Physical Practical Class 10 CBSE sessions, you dive deeper into how things work. TopperLearning presents study materials for CBSE Class 10 Physics which will help you to effectively prepare for your final examination. Our Physics study materials are prepared by subject experts and include video lessons, revision notes, question banks, sample papers and past years' question papers.

Knowledge of physics gained through theories and Science practicals for Class 10 CBSE Physics can be a stepping stone towards great career profiles such as a physicist or an inventor. Even if you do not want to pursue a career related to Physics, the concepts learned through your CBSE Class 10 Physics chapters can make you a smarter person.

All these help students to score well in the examination. Our study materials contain educational resources which will help you to gain a better understanding of Physics. The content is revised from time to time following the latest guidelines of the CBSE syllabus. Additionally, we have introduced an ‘Ask the Expert’ facility, where all Physics doubts are instantly resolved by our subject matter experts. Students will also be able to understand all the difficult concepts by referring to our textbook solutions (such as NCERT and RD Sharma textbook solutions) which are free of cost. We are confident that students will find our learning materials helpful to achieve greater amount of success in the CBSE Class 10 examination.

Radius of curvature of a spherical mirror = 2 × Focal length (f)

Hence, the focal length of the given spherical mirror is 10 cm.

Concept Insight - Always remember that focal length of the spherical mirror is half its radius of curvature.

A concave mirror can give an erect and enlarged image of an object.

Concept insight:  When an object is placed between the pole and the principal focus of a concave mirror, the image formed is virtual, erect, and enlarged.

A convex mirror is preferred as a rear-view mirror in vehicles because it gives virtual, erect, and diminished image of the objects placed in front of it. Also, a convex mirror has a wider field of view, which allows the driver to see most of the traffic behind him.

Concept insight:  Recall the nature of images formed by convex mirror irrespective of the position of the objects.

Hence, the focal length of the given convex mirror is 16 cm.

Concept Insight - Focal length of a spherical mirror is half the radius of curvature.

Magnification produced by a spherical mirror is given by the relation,

Let the height of the object, hO = h

Here, the negative sign indicates that an inverted image is formed at a distance of 30 cm infront of the given concave mirror.

Concept Insight - Following sign conventions in this type of question is very important. Remember that a real image of 3 times the size of the object corresponds to magnification of -3 (note the negative sign).

The light ray bends towards the normal.

Concept insight:  Air is rarer medium & water is denser medium. The direction of bending of light depends on whether the light is moving from rarer to denser medium or vice versa.

Refractive index of a medium nm is given by,

Speed of light in the glass,

Concept insight:  Remember this formula for refractive index of a medium.

The refractive index of medium 2 with respect to medium 1 is given as,

The refractive index of medium 1 with respect to medium 2 is given as,

Speed of light in a medium is given by the relation for refractive index (nm). The relation is given as

It can be observed from the table that the refractive indices of kerosene, turpentine, and water are 1.44, 1.47, and 1.33 respectively. Therefore, light travels the fastest in water.

Concept Insight: Higher is the refractive index of a medium, less is the speed of light in the medium.

Refractive index of a medium nm is related to the speed of light in that medium v by the relation:

where, c is the speed of light in vacuum/air

The refractive index of diamond is 2.42. This suggests that a light ray travelling in air and entering diamond gets slowed down and its speed becomes

times that in air.

1 dioptre is defined as the power of a lens of focal length 1 metre. 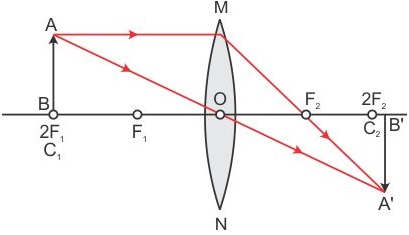 Concept Insight - One should extremely be careful while substituting the values of u, v and f without forgetting to put the appropriate sign conventions.

Here, negative sign arises due to the divergent nature of concave lens.

While using the formula of power, one should be careful to use the value of focal length expressed in meters only.

Concept Insight: A lens allows light to pass through it. Since clay does not show such property, it cannot be used to make a lens.

(d) Between the pole of the mirror and its principal focus.

Concept Insight: When an object is placed between the pole and principal focus of a concave mirror, the image formed is virtual, erect and larger than the object.

(b) At twice the focal length

Concept Insight: By convention, the focal lengths of a concave mirror and a concave lens are taken as negative. Hence, both, the spherical mirror and the thin spherical lens are concave in nature.

(d) either plane or convex

Concept Insight: A convex lens gives an erect and magnified image of an object when it is placed between the optical centre and focus of the lens. Also, magnification is more for convex lenses having shorter focal length. Therefore, for reading small letters, a convex lens of focal length 5 cm should be used.

A concave mirror gives an erect image when an object is placed between its pole (P) and the principal focus (F).

Hence, to obtain an erect image of an object from a concave mirror of focal length 15 cm, the object must be placed anywhere between the pole and the focus (i.e. within 15 cm from the mirror). The image formed will be virtual, erect, and magnified in nature, as shown in the given figure. 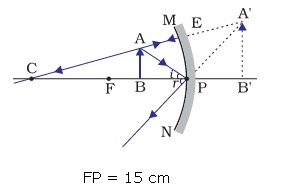 Concept Insight: Recall that in case of concave mirror, the erect & hence the virtual image can be formed only when the object is placed between the principal focus and pole.

(a) Concave mirror is used in the headlights of a car. This is because concave mirrors can produce powerful parallel beam of light when the light source is placed at their principal focus.

(b) Convex mirror is used in side/rear view mirror of a vehicle because convex mirrors give a virtual, erect, and diminished image of the objects placed in front of them and have a wide field of view. It enables the driver to see most of the traffic behind him/her.

(c) Concave mirrors are convergent mirrors. That is why they are used to construct solar furnaces. Concave mirrors converge the light incident on them at a single point known as principal focus. Hence, they can be used to produce a large amount of heat at that point.

The convex lens will form complete image of an object, even if its one-half is covered with black paper. It can be understood by the following two cases.

When the upper half of the lens is covered:

In this case, the rays of light coming from the object will be refracted by the lower half of the lens. These rays meet at the other side of the lens to form the image of the given object, as shown in the following figure.

When the lower half of the lens is covered:

In this case, a ray of light coming from the object is refracted by the upper half of the lens. These rays meet at the other side of the lens to form the image of the given object, as shown in the following figure.

Concept Insight: In case of the half covered lens, the number of rays used up to make the image on the other side of the lens will be reduced to half.

The positive value of v shows that the image is formed at the other side of the lens.

The negative sign shows that the image is real and formed behind the lens.

The negative value of image height indicates that the image formed is inverted.

The position, size, and nature of image are shown in the following ray diagram.

Concept Insight: Remember to use appropriate sign conventions while substituting the values in lens formula.

The negative value of u indicates that the object is placed 30 cm in front of the lens. This is shown in the following ray diagram. 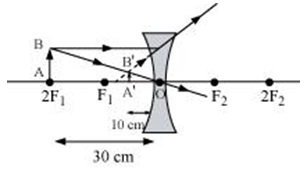 Concept Insight:  Remember to use appropriate sign conventions while substituting the values in lens formula.

The positive value of v indicates that the image is formed behind the mirror.

The positive value of magnification indicates that the image formed is virtual and erect.

Concept insight - Correct interpretation of the signs are important.

Object distance u is conventionally always taken as negative.

Magnification produced by a mirror is given by, 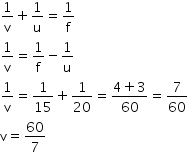 The positive value of v indicates that the image is formed behind the mirror.

The positive value of magnification indicates that the image formed is virtual.

The positive value of the image height indicates that the image formed is erect.

Therefore, the image formed is virtual, erect and smaller in size.

Concept Insight - Write the given data in appropriate sign conventions. Then identify the unknown quantities that need to be evaluated. Then put the formulae that are most suitable.

The screen should be placed at a distance of 54 cm in front of the given mirror.

The negative value of the image height indicates that the image formed is inverted.

Concept Insight - The interpretation of sign convention is the key here.

The focal length is negative. Hence, it is a concave lens.

Concept Insight - The value of the focal length should be written in metres when substituting in the formula:

A convex lens has a positive focal length. Hence, it is a convex lens or a converging lens.

On TopperLearning, your student dashboard gives you access to CBSE Class 10 Chapter-wise Physics lesson explanation as per the latest CBSE Grade 10 syllabus. We have more than 2000 questions (with answers) and several sample papers to help you prepare for Physics Class 10 Board exam.

You don’t need to compile notes from various sites online. With your TopperLearning account, you get complete access to NCERT Solutions, notes, tests, MIQs and more. In case, you have doubts related to the Physics CBSE Class 10 topics, you can ask an expert and our expert will clear your doubts within 24 hours.

We aim to develop your interest in learning Physics by making it enjoyable through videos and more. If you enjoy learning the subject, you can score better marks and get the opportunity to become a CBSE topper.