What are sacred groves? How does biodiversity help the ecosystem? Discover the answers in TopperLearning’s NCERT Solutions for CBSE Class 10 Geography Chapter 2 Forest and Wildlife Resources. In the solutions for this chapter, you will come across amazing facts about initiatives to protect forests and wildlife.

To further revise this CBSE Class 10 Geography chapter, go through our video lessons and attempt our practice tests and sample paper solutions on our e-learning portal. You will find all the necessary online materials to study your Geography lessons as per your convenience. 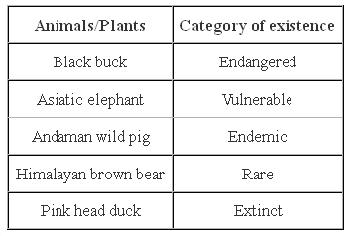 (i) Bio diversity is the varieties of life found on the Earth. An eco system which has rich bio diversity has several species of plants and animals which are closely connected to each other through biotic and abiotic factors.

Biodiversity helps in boosting the productivity of the co systems in which each and every specie play an important role. For example, a large number of plant species results in greater varieties of crops.Similarly, many micro-organisms play an important role in bio diversity. They fertilise the soil and play a role in recycling of many minerals like carbon in the environment. This helps in sustaining and improving human lives.

(ii) Human activities and man’s insensitivity to the environment have been the major causes for the depletion of flora and fauna. Various activities carried out by man are as follows -

1. Deforestation for the purpose of expansion of agricultural land has led to the destruction of the flora and the fauna.

2. Degradation of forests by Shifting cultivation (Jhum), a type of ‘slash and burn’ agriculture.

5. Habitat destruction, hunting, poaching, over-exploitation of forest products, environmental degradation, forest-fires are some other factors which have led to the decline of India’s biodiversity.

6. Over population as well as environmental destruction due to unequal access, inequitable consumption of resources and differential sharing of responsibilities for environmental well-being are also responsible for the depletion of flora and fauna.

(i) Conservation strategies are not new to India. For years our forests have been home to different traditional communities. These communities have a complex relationship with their environment, particular flora and fauna are integral to their identity, and they take a number of steps to protect the same. Many forests have been demarcated as 'Sacred Groves' in which any kind of human activity is prohibited.

The Mundas and the Santhal of Chota Nagpur region worship Mahua and Kadamba trees; the tribals of Orissa and Bihar worship the tamarind and mango trees. Similarly, the Bishnois of Rajasthan treat the blackbuck,nilgai and peacocks as an integral part of their community.. . Villagers around the Sariska Reserve have opposed mining activities in the region as these activities endanger wildlife. Villagers in the Alwar district of Rajasthan have banned hunting and lumbering activities in a 1200 hectare area they have marked as Bhairodev Dakav ‘Sonchuri’. Such activities have helped to preserve patches of virgin forest land.

(ii) It is important to follow Good practices towards conserving forest and wildlife.

Central and state governments in India have set up national parks and wildlife sanctuaries to protect forests and endangered species in wildlife.

Projects for the protection of specific animals like the tiger, one-horned rhinoceros, crocodiles etc have been announced.

Conservation projects today focus on biodiversity rather than on just a few components. Insects like butterfies, moths etc have been added to the list of protected species.

Various local communities, especially in tribal areas, who are dependent on forests for their living are now taking an active role  by working along with government officials to conserve these habitats.

Worshiping of forests and demarcating them as 'Sacred groves' helps in the protection of various species of plants and animals.

Community Movements like the Chipko movement in the Himalayas have played an active part in resisting deforestation and successfully carrying out community afforestation with indigenous species.

Other Chapters for CBSE Class 10 Geography