Concept insight: Diffusion process should be clear.
Solution 2
The most important criteria to decide that something is alive is the movement. All living things move by themselves without any external help. In some cases the movements of living things are quite fast which can be easily observed but in other cases the movements are very slow and hence observed with difficulty. For example - the movements in most of the animals are fast but the movements in plants are usually slow.
Concept insight: Students should know difference between living and non living things.
Solution 3
Various outside raw materials used by an organism are as follows:
a. Food for providing energy.
b. Oxygen for breakdown of food to obtain energy.
c. Water for proper digestion of food and other functions inside the body.

Concept insight: Remember the various raw materials required by a living organism for its survival.
Solution 4
There are various life processes which are essential for maintaining life. Some of them are as follows:
a. Nutrition
b. Respiration
c. Excretion
d. Transportation

Solution 1
Concept insight: (i) Differences should always be written in tabular form.
(ii) Differences should be written in terms of their significance.
(iii) Write only those many numbers of differences as stated in the question.
(iv) Give example wherever possible.
Solution 2
Plants need the following things for photosynthesis:
(i) Plants get CO2 from atmosphere through stomata.
(ii) Plants absorb water from soil through roots and transport it to the leaves.
(iii) Sunlight is absorbed by the chlorophyll and other green parts of the plant.
Concept insight:
Students should know the process of photosynthesis, raw materials required for photosynthesis and their sources.
Solution 3
Role of Hydrochloric acid in our stomach:
i. It provides an acidic medium in our stomach which is necessary for activation of pepsin enzyme.
ii. It kills germs present in the food.
Concept insight: Students should know the importance of Hydrochloric acid in stomach.
Solution 4
Digestive enzymes such as amylase, lipase, pepsin, trypsin, etc. helps to break the complex food particles into simple ones so that these simple particles can be easily absorbed by the blood and thus transported to all the cells of the body.
Concept insight:
List the various digestive enzymes and their respective functions.
Solution 5
The inner lining of small intestine has millions of tiny finger-like projections called villi. These villi increase the surface area for absorption of food and are richly supplied with blood vessels. These blood vessels take the absorbed food to each and every cell of the body where it is used for obtaining energy, building up new tissues and repairing of old tissues.
Concept insight: Remember the structure and function of small intestine.

Solution 1
Terrestrial organisms take up oxygen from the atmosphere whereas aquatic animals that live in water use oxygen dissolved in surrounding water. Since, air dissolved in water has fairly low concentration of oxygen so, the aquatic organisms have to breathe faster to get more oxygen. Terrestrial organisms take oxygen from the oxygen rich atmosphere so, they have much less breathing rate than aquatic organism.
Concept insight:
Student should know the respiratory structures of different animals.
Solution 2
Glucose is broken down into a three carbon molecule called pyruvate in the cell cytoplasm. Pyruvate is further broken down by different ways to provide energy in various organisms.   Pyruvate is broken down in different ways in different organisms as shown below:

i.In yeast cells, during fermentation, pyruvate is converted into ethanol and carbon dioxide in the absence of oxygen.
ii. In mitochondria, breakdown of pyruvate takes place in presence of oxygen to give rise three molecules of carbon dioxide and water.
iii. Sometimes, when there is lack of oxygen, especially during vigorous activity, in our muscles, pyruvate is converted into lactic acid.
Concept insight:
Students should know various types of respiration.
Solution 3
Transport of Oxygen: The respiratory pigment, haemoglobin present in red blood cells takes up the oxygen from the air to the lungs. They, then carry the oxygen to cells and tissues which are deficient in oxygen.
Transport of carbon dioxide: Carbon Dioxide is more soluble in water. Hence, it is mostly transported from body tissues in the dissolved form in our blood plasma to lungs where it diffuses from blood to air in the lungs and then expelled out through nostrils.
Concept insight:
Students should know the transportation of respiratory gases.
Solution 4
In the lungs, the wind pipe branches into bronchi which, in turn, branches into smaller tubes called bronchioles. Bronchioles have pouch like air-sacs at their ends called alveoli. Each lung contains about 300 - 350 millions of alveoli. The alveoli provides maximum surface area for exchange of gases. They have very thin walls and are surrounded by an extensive network of blood vessels to facilitate exchange of gases.
Concept insight:
Remember the structure of human respiratory system.

Solution 1
The main components of the transport system in human beings are the heart, blood, and blood vessels.
(i) Heart receives deoxygenated blood from the various body parts of the body and sends this impure blood to the lungs for oxygenation. After receiving the oxygenated blood, it pumps oxygenated blood to all the parts of the body.
(ii) Blood helps in the transport of oxygen, nutrients, CO2, and nitrogenous wastes throughout the body. WBCs protect the body against infections and diseases.
(iii) The blood vessels (arteries, veins, and capillaries) help in circulating the blood throughout the body.
Concept insight:
Student should know the structure and functions of human transport system.
Solution 2
Warm-blooded animals such as birds and mammals maintain a constant body temperature by cooling themselves when they are in a hotter environment and by warming their bodies when they are in a cooler environment. It is therefore necessary to separate oxygenated and deoxygenated blood to maintain efficient supply of oxygen into the body. Hence, these animals require more oxygen (O2) for more cellular respiration so that they can produce more energy to maintain their body temperature.
Concept insight:
Students should know the difference between warm blooded and cold blooded organisms.
Solution 3
The transport system in highly organised plants is composed of vascular tissues, xylem and phloem.
Xylem helps to conduct water and minerals obtained from the soil to the rest of the plant. Phloem transports food materials from the leaves to different parts of the plant body.
Concept insight:
Remember the various vascular tissues, their components and their functions.
Solution 4

Concept insight:
Students should know the mechanism of transport of water and minerals in plants.
Solution 5

Concept insight:
Students should know the tissues involved in transportation of food and its mechanism in plants. 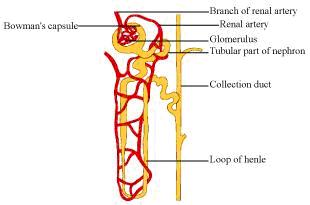 Functioning of a nephron:
(i) The blood enters the kidney through the renal artery, which branches into many capillaries associated with glomerulus.
(ii) The water and solute are transferred to the nephron at Bowman's capsule.
(iii) In the proximal tubule, some substances such as amino acids, glucose, and salts are selectively reabsorbed and unwanted molecules are added in the urine.
(iv) The filtrate then moves down into the loop of Henle, where more water is absorbed.
(v) From here, the filtrate moves upwards into the distal tubule and finally to the collecting duct. Collecting duct collects urine from many nephrons.
Concept insight: Remember the structure and function of nephron.
Solution 2
Plants use the following ways to get rid of excretory products:
i. Many waste products are stored in vacuoles of the cells.
ii. Some waste products are stored in the leaves and they are removed as the leaves fall off.
iii. Some waste products such as resins, tannins and gums are stored in non-functional old xylem or bark.
iv. Plants also excrete some waste products through roots into the soil around them.
v. Plants get rid of excess water through transpiration.
Concept insight: Students should know the various waste products of plants and how are they excreted out.
Solution 3
The amount of urine produced depends on the amount of excess water and dissolved wastes present in the body. Some other factors such as habitat of an organism and hormone such as Anti-diuretic hormone (ADH) also regulates the amount of urine produced.
Concept insight:
Remember the mechanism of urine formation and its regulation in our body.

Solution 1
(c) In human beings, the kidneys are a part of the system for excretion.
Concept insight:
Students should know the various organs of excretory system.
Solution 2
(a) In a plant, the xylem is responsible for transport of water.
Concept insight:
Remember the functions of various vascular tissues.
Solution 3

(b) The breakdown of pyruvate to give carbon dioxide, water and energy takes place in mitochondria.

Student should remember the process of aerobic respiration.

Concept insight: Remember the various components of food and their digestion.

Saliva is secreted by salivary glands, located under the tongue. It moistens the food for easy swallowing. It contains a digestive enzyme called amylase, which breaks down starch into sugar.

Concept insight: Student should know the location and function of saliva.

Conditions necessary for autotrophic nutrition are:

Carbohydrates (food) and O2 are the by-products of photosynthesis.

Concept insight: Students should know the necessary conditions required for photosynthesis and the products formed during this process.

Differences between aerobic and anaerobic respiration:


(i) Differences should always be written in tabular form.

The alveoli have a structure specialised for efficient gaseous exchange:

(i) Walls are extremely thin.

(ii)They have a large surface area in relation to volume.

(iii) They are surrounded by numerous blood capillaries.

Concept insight: Students should know the structure and function of alveoli.

Solution 10
Haemoglobin is the respiratory pigment that transports oxygen to the body cells for cellular respiration. Therefore, deficiency of haemoglobin in blood can affect its oxygen supplying capacity. This can lead to deficiency of oxygen in the body cells as a result of which the person suffers from anaemia, breathing problems and exhaustion.

Concept insight: Student should remember the components of blood and their respective functions.
Solution 11
A circulatory system in which the blood travels twice through the heart in one complete cycle of the body is called double circulation.
Importance of double circulation:
The separation of oxygenated and de-oxygenated blood allows a more efficient supply of oxygen to the body cells. This efficient system of oxygen supply is very useful in warm-blooded animals such as human beings. Warm-blooded animals have to maintain a constant body temperature by cooling themselves when they are in a hotter environment and by warming their bodies when they are in a cooler environment. Hence, they require more O2 for more respiration so that they can produce more energy to maintain their body temperature. Thus, the circulatory system of humans is more efficient because of the double circulatory heart.
Concept insight: Students should know the structure and functioning of heart and also the flow of blood in human body.
Solution 12

(i) Differences should always be written in tabular form.

(i) Differences should always be written in tabular form.

Other Chapters for CBSE Class 10 Biology