history of establishment of uno

UNO (United Nations Organisation) also known as the United Nations was founded to maintain international peace and security, develop friendly relations among nations and promote social progress, better living standards and human rights. This organisation was created following the Second World War (where 51 countries participated) to prevent other such conflict.

Prior to United Nations, (UN), the League of Nations (founded in 1919) was the international organization which was responsible for ensuring peace and cooperation between world nations. It was considered successful, however, in 1930s its success waned as the Axis Powers (Germany, Italy, and Japan) gained influence, which eventually lead to the start of World War II in 1939.

Despite the failure of the League of Nations, the proposal for establishing a new international body was put forward. The idea of the United Nations began to be articulated in August 1941, when U.S. President Franklin D. Roosevelt and British Prime Minister Winston Churchill signed the Atlantic Charter, which proposed a set of principles for international collaboration in maintaining peace and security. They then coined the term "United Nations" in 1942 in the Declaration by United Nations.

In October 1943, the major Allied powers -- Great Britain, the United States, the USSR, and China issued the Moscow Declaration, which officially stated the need for an international organization to replace the League of Nations. The delegates then started to sketch out the form of the world body but would often disagree over issues of membership and voting. Compromise was reached by the "Big Three"— the United States, Britain, and the USSR—at the Yalta Conference in February 1945, and all countries that had adhered to the 1942 Declaration by the United Nations were invited to the United Nations founding conference.

On April 25, 1945, the United Nations Conference on International Organization was convened in San Francisco. The conference was attended by 50 nations and several non-organisations – all of which signed the Charter. The UN officially came into existence on October 24, 1945 after ratification of the Charter. 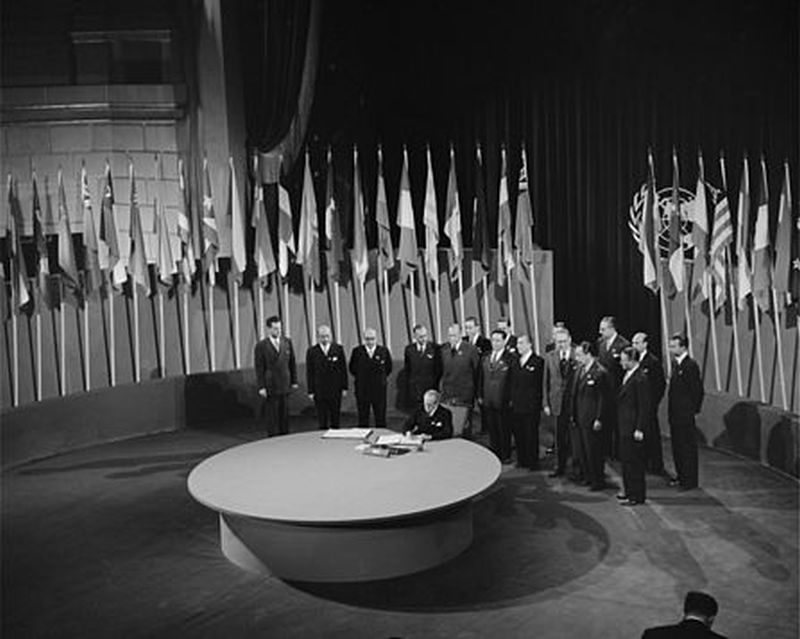