What is surface tension? 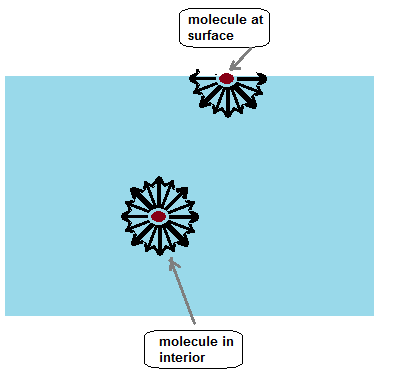 A liquid stays together because of attraction between molecules. Inside liquid, intermoleculer distances are such that it is attracted to all the surrounding molecules. This attraction reults in a negative potential energy for the molecule. But in the case of molecule near the surface, only lower half of it is surrounded by liquid molecules. There is some negative potential energy due to these, but obviously it is less than that of a molecule fully inside. Approximately it is half of the latter. Thus molecules on a liquid surface have some extra energy in comparison to molecules in the interior. A liquid thus tends to have the least surface area which external conditions permit. Increasing surface area requires energy. Creation of more surface (spreading of surface) by keeping volume fixed requires additional energy. This surface energy per unit area of the liquid interface is know as surface tension. This is also equal to force per unit length exerted by an imaginary line on the liquid surface.
Answered by Expert 29th June 2018, 2:34 PM
Rate this answer