NCERT Textbook Solutions are considered extremely helpful when preparing for your CBSE Class 6 Geography exam. TopperLearning study resources infuse profound knowledge, and our Textbook Solutions compiled by our subject experts are no different. Here you will find all the answers to the NCERT textbook questions of Chapter 3 - Motions of the Earth.

All our solutions for Chapter 3 - Motions of the Earth are prepared considering the latest CBSE syllabus, and they are amended from time to time. Our free NCERT Textbook Solutions for CBSE Class 6 Geography will strengthen your fundamentals in this chapter and can help you to score more marks in the examination. Refer to our Textbook Solutions any time, while doing your homework or while preparing for the exam.

(b)Rotation: It is defined as the movement of Earth around its own axis. It takes Earth 24 hours to complete a rotation.

Revolution: It is defined as the movement of Earth around the sun in a fixed orbit. It takes Earth 365 ¼ days to complete a revolution

(c) Leap year is a year which has 366 days instead of usual 365 days. This is because earth takes 365 days and 6 hours to complete a revolution. But, for the sake of convenience, we consider that a year consists of 365 days. This leads to exclusion of 6 hours for three consecutive years. However, these 6 hours constitute a day in four year (6+6+6+6 = 24). Therefore, one day is added to that year in the month of February, which becomes the month of 29 days once in four years.

(e) Equinox is defined as the position wherein neither of the poles is tilted towards the sun. This results in rays of the sun falling directly over the equator. This results in earth experiencing equal days and equal nights. Also, exactly half of the earth is in light and the other half is in dark. This phenomenon occurs twice in a year, i.e. on 21st March and 23rd September.

The conditions are reversed with respect to the Southern Hemisphere. 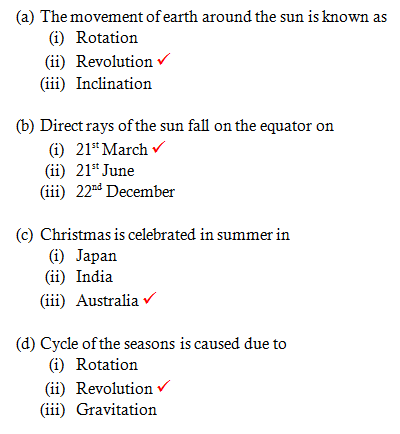 (b) The daily motion of the earth is rotational.

(c) The earth travels around the sun in an elliptical orbit.

(d) The sun's rays fall vertically on the Tropic of Cancer on 21st June.

TopperLearning provides step-by-step solutions for each question in each chapter in the NCERT textbook. Access Chapter 3 - Motions of the Earth here for free.