In the free state, water occurs in the solid, liquid and gaseous states.

Water is considered a compound because it is made of two elements hydrogen and oxygen combined in the ratio 1:8 by mass.

a) The temperature in Mumbai and Chennai do not fall as low as in Delhi because these cities are situated in the coastal areas. Due to high specific heat capacity, the presence of a large amount of water is able to modify the climate of the nearby land areas making them warmer in winter and cooler in summer. So, the temperature does not fall as low as it does in Delhi.

b) Our body is almost 65% of water, and it has the property of specific heat. Due to high specific heat capacity, the presence of a large amount of water is able to modify the climate of the body and control the temperature of our body, which is warm in winter and cool in summer.

The sudden release of the latent heat of condensation causes the violence associated with torrential rain.

The freezing point of water decreases due to the presence of dissolved impurities.

Water has an unusual physical property. When cooled, it first contracts in volume, as do other liquids, but at 4°C (maximum density), it starts expanding, and continues to do so till the temperature reaches 0°C, the point at which it freezes into ice.

The property of anomalous expansion of water enables marine life to exist in the colder regions of the world, because even when the water freezes on the surface, it is still liquid below the ice layer.

The property of anomalous expansion of water enables aquatic life to exist because water freezes on the surface of the water body, but it is still liquid below the ice layer.

When tap water is boiled and evaporated:

• A number of concentric rings of solid matter are seen on the watch glass after evaporation of tap water.

Importance of dissolved salts in water:

They add taste to water for drinking purposes.

Solubility of nitrates decreases with a fall in temperature. Thus, when a hot saturated solution of potassium nitrate cools, it forms crystals as it separates from the solution.

Three factors on which the solubility of a solid depend:

When copper (II) sulphate crystals are heated in a hard glass test tube, the following observations are observed:

When iron (II) sulphate is heated in a test tube, the following is observed:

Solubility of potassium nitrate (KNO3) in water increases with an increase in temperature.

Solubility of calcium sulphate (CaSO4) in water decreases with an increase in temperature.

With an increase in pressure, the solubility of a gas in water increases.

With an increase in temperature, the solubility of a gas in water decreases.

For example, the solubility of carbon dioxide in water under normal atmospheric pressure is low, but when the water surface is subjected to higher pressure, a lot more of CO2 gas gets dissolved in it.

Similarly, in case of soda water, on opening the bottle, the dissolved gas rapidly bubbles out because the pressure on the surface of the water suddenly decreases.

These are substances which can readily absorb moisture from other substances without chemically reacting with them.

Hydrated salts can be converted to anhydrous substances by heating and also when exposed to dry air.

The composition of water is 2 atoms of hydrogen with 1 atom of oxygen (H2O).

By number of atoms, they combine in the ratio 2:1.

• Oxygen dissolved in water is used by marine life like fish for respiration, and thus, marine life is sustained.

• Aquatic plants make use of dissolved carbon dioxide in photosynthesis to prepare food.

Marine organisms such as oysters and snails extract calcium carbonate from calcium bicarbonate to build their shells.

Substances which contain water molecules along with salt are hydrated substances.

Methods by which hydrous substances can be made anhydrous:

The dissolved impurities in water are salts and minerals.

In some limestone caves, conical pillar-like objects hang from the roof and some rise from the floor. These are formed by water containing dissolved calcium hydrogen carbonate continuously dropping from the cracks in the rocks. Release of pressure results in the conversion of some hydrogen carbonate to calcium carbonate.

This calcium carbonate little by little and slowly deposit on both roof and floor of the cave.

These meet after a time. In a year, some grow less than even a centimetre, but some may be as tall as 100 cm.

If the water flows over beds of gypsum (CaSO4.2H2O), a little bit of gypsum gets dissolved in water and makes it hard.

Soap is used for washing purposes.

Formation of soap curd will go on as long as calcium and magnesium ions are present. Till then, no soap lather will be formed and cleaning of clothes or body will not be possible. Moreover, these precipitates are difficult to wash from fabrics and sometimes form rusty spots if iron salts are present in water.

Lime is first thoroughly mixed with water in a tank and then fed into another tank containing hard water. Revolving paddles thoroughly mix the two solutions. Most of the calcium carbonate settles down. If there is any solid left over, it is removed by a filter. This is known as Clarke's process.

When washing soda or soda ash is added to hard water, the corresponding insoluble carbonates settle down and can be removed by filtration.

Permutit is an artificial zeolite. Chemically, it is hydrated sodium aluminium orthosilicate with the formula Na2Al2Si2O8.XH2O. For the sake of convenience, let us give it the formula Na2P. 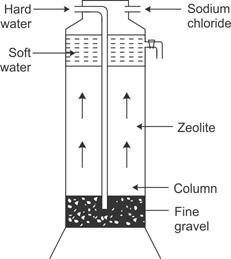 When no longer active, permutit is regenerated by running a concentrated solution of brine over it and removing calcium chloride formed by repeated washing.