Mr Pertronski's letter said that Wanda would not come to school anymore. Neither would her brother Jake,  They were moving away to a big city. He also said that there, nobody would tease them and call them ‘Pollack’ and no one would ask them why they had funny names because there were plenty of funny names in the city.

Miss Mason was unhappy and upset. She said that she was sure that none of  the boys and girls of Room Thirteen would purposely and deliberately  hurt  anyone's feelings because their name happened to be a long and unfamiliar one.. She preferred to think that what was said was said in thoughtlessness. She thought of it as a very unfortunate and sad thing to have happened and wanted everybody in the class to think about it.

After listening to the note from Wanda's father, Maddie had a very sick feeling in the bottom of her stomach. She could not concentrate when she tried to  prepare her lessons. She had not enjoyed listening to Peggy ask Wanda how many dresses she had in her closet. However, she had always stood by silently and done nothing to stop her and that was as bad as what Peggy had done. She had been a coward. As far as Peggie was concerned she had never ever felt that they were being mean to Wanda but Maddie always felt that they were doing something wrong.. She could put herself in Wanda's shoes.

Maddie wanted to tell Wanda that she had not meant to hurt her feelings. She felt that she had to do something, whether Peggy felt badly or not. She had  to find Wanda. She had the feeling that Wanda might not have moved away as yet. She thought that Peggy would climb the Boggins Heights with her,  and together, they would tell Wanda that she had won the contest; that they thought she was smart; and that the hundred dresses were beautiful.

Peggy had told Maddie with pretended casualness that both of them should go and see if Wanda had left the town or not. The excuse that Peggy thought up  for her behaviour was that she never called Wanda a foreigner or made fun of her name. She also said that she never thought Wanda had even the sense to know that they were  making  fun  of  her.  She  thought  Wanda  was  too  dumb.  However,  she appreciated the fact that Wanda could draw so well. She was making such excuses because she was feeling bad about what had happened, realising  that it probably was because of her teasing that Wanda had left the school.

Maddie hoped that they would find Wanda. She wanted to tell her that they were sorry that they had picked on her; and that how wonderful the whole school thought she was. She also thought  of requesting her not to leave the  school as everyone in school would be nice to her.. She even thought that she and Peggy would fight anybody who was not nice to her.

Wanda's house looked shabby but clean. It reminded Maddie of Wanda's blue dress because it was also very shabby and faded, but clean.

Maddie was not happy as she could not find Wanda at her home. She could not sleep that night. She thought about Wanda, her faded blue dress, and the little house she lived in. She also thought about the glowing picture her hundred dresses made when they were all lined up in the classroom. At last, Maddie thought really hard and after a long time, she reached an important decision. She decided that she would never stand by and say nothing again. If she ever heard anybody picking on  someone because they were funny looking or because they had strange names, then she would speak up. She did not even mind losing Peggy's friendship over it. She knew she could not make things right with Wanda. However, she had  decided that in the future, she would never make anybody else unhappy again.

The girls wrote a friendly letter to Wanda telling her that she had won the contest. They also told her how pretty her drawings were. They asked her if she liked the place where she was living and if she liked her new teacher. They wanted to say that they were sorry. However, they ended up just writing a friendly letter. They signed it with lots of X's for love.

No, they did not get a reply. Maddie was more anxious for a reply as she thought a lot about it. She would put herself to sleep making speeches  about  Wanda and defending her from great crowds of girls who were trying to tease her. Before Wanda could press her lips together in a tight line, which she did before answering, Maddie would cry out and ask everybody to stop and then, everybody would feel ashamed the way she felt. Peggy, on the other  hand, had begun to forget about the whole affair. This shows that Maddie was more anxious for a reply than Peggy.

It is likely that like Wanda, other members of her family also faced ridicule  and mockery because of their long and different names. Wanda's family moved to a big city as in the city everybody had funny names, so they would not  face as much trouble in this regard. However, life could still be difficult for them as they could be teased about various other things. As they were poor they would still not possess all the things that the rich children had and so would have to face various challenges and social pressures in the big city too.

Yes, Maddie was right when she thought that her silence was as bad as  Peggy's teasing. She was right because even though she felt bad about it and never teased Wanda herself, she did not say anything to stop it. A person who sees  something wrong  happening  in  front  of  him/her and does nothing to stop it is  as  much  an  offender  as  the  person committing the offence. Maddie was too afraid to say anything because she did not want to lose  Peggy's  friendship. Also, she was poor  herself, so she feared that everybody would make fun of her too.

Peggy believed that Wanda was dumb as she could not understand why Wanda said she had a hundred dresses, even when everybody knew that she was  poor. She knew everybody was laughing at her. Even then, she kept giving the same answer.
She even described the dresses and the number of shoes she said she had. That is why Peggy thought Wanda was dumb. She changed her opinion later when she saw the hundred dresses Wanda had talked about. She saw the drawings and was highly impressed by their beauty. She realized that Wanda was a very talented little girl and a good artist. 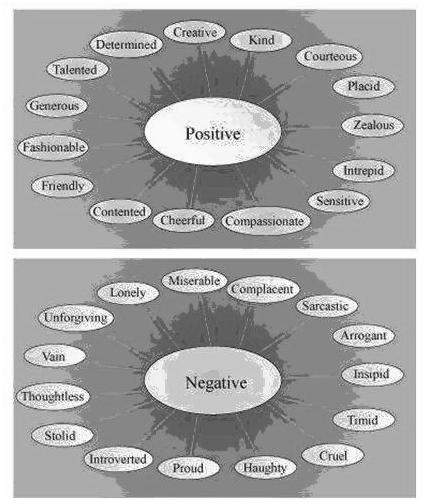 The important decision that Maddie made was that she would never stand by and say nothing again. If she ever heard anybody picking on someone because  they were funny-looking or because they had strange names, she would speak up. She did not even mind losing Peggy's friendship over it. She knew she  could not make things right with Wanda. However, she had decided that in  the  future, she would never make anybody else unhappy again.
She was unhappy that she could not find Wanda at her home. She could not sleep that night. She thought about Wanda, her faded blue dress, and the little house she lived in. She also thought about the hundred glowing pictures, which were all lined up  in  the  classroom.  She  was  feeling  guilty  for not  having  said  anything  when everybody else was teasing Wanda. It was her guilt that made her think very hard and arrive at the important decision.

Maddie and Peggy had written a letter to Wanda. Though it was a friendly  letter, Wanda  must  have  understood  the  emotions  behind  the  writing  of  that  letter. Therefore, Wanda's request that two of her drawings be given to Maddie and Peggy could be her way of telling them that she had forgiven and forgotten. When Maddie and Peggy did not receive a reply to their letter for a long time, they felt that perhaps Wanda was still hurt and angry. Therefore, they were  surprised when they came to know that Wanda had asked Miss Mason to give them two of her drawings.

Wanda must  have been aware that the other children were teasing and making fun of her by their behaviour and the manner in which they all surrounded her the moment the ‘dresses game’ began.. Peggy kept asking her the same questions everyday and would nudge a friend standing close by as if to say she already knew what the answer was. Once the questioning was over they would let her go and before she had gone very far they would burst into shrieks and peals of laughter which she definitely must have  heard.

(i) lined up-And she thought of the glowing picture those hundred dresses made - all lined up in the classroom.
(ii) thought up- Peggy, who had thought up this game, and Maddie, her inseparable friend, were always the last to leave.
(iii) took off - Miss Mason took off her glasses, blew on them and wiped them on her soft white handkerchief.
(ivi) stood by - She had stood by silently, and that was just as bad as what Peggy had done.

Other Chapters for CBSE Class 10 English