Height above the ground = h

where g is acceleration due to gravity

Work is a scalar quantity.

Work, as a physical quantity, requires only magnitude to be represented. Hence, it is scalar quantity.

When a force of 1 newton moves a body through a distance of 1 metre in its own direction, then the work done is known as 1 joule.

The condition for a force to do work on a body is that it should produce motion in the body.

Energy is a scalar quantity. It has only magnitude but no direction.

a) Unit of work is joule.

b) Unit of energy is joule.

The work done against gravity is zero when a body is moved horizontally along a frictionless surface because force of gravity acts perpendicular to the direction of motion.

The kinetic energy of a body depends on

b) Square of the velocity of the body, v2

Doubling the velocity would have a greater effect on kinetic energy.

a) Both kinetic and potential energy

b) Both kinetic and potential energy

Note: In all the above cases we take ground as reference level where potential energy is zero.

Let masses of body A and B be m

Height of body A = h

Potential energy is a scalar quantity as it has magnitude only and it does not require any specification of direction.

Work done is equal to PE acquired by the body.

a) magnitude of force

b) distance through which the body moves

Work done is directly proportional to the force applied and the distance through which the body moves.

where W is work done, F is force applied and s is distance through which the body moves.

Yes, it is possible that a force is acting on a body but still work done is zero. For example, in the case of a man pushing a wall, the work done is zero despite of non-zero force, since there is no displacement of the wall.

a) Work done by force applied by the boy is positive because this force is in the direction of motion of the body.

b) Work done by the gravitational force is negative because this force is against the direction of motion of the body.

Kinetic energy is directly proportional to the mass of the body, m.

Kinetic energy is directly proportional to square of speed of the body, v

(a) Positive work: Work done by the force applied by a person on a ball that is thrown upwards.

(b) Negative work: Work done by gravitational force of earth on a ball thrown upwards.

(c) Zero work: Work done by gravitational force of earth on a box that is sliding horizontally on the ground.

Neagtive sign implies that force of brakes acts opposite to the direction of motion.

Initial velocity of rock, u = 0

Put the value of 'as' from equation (i)

Work done by a force applied on a body is

i) positive when the force acts in the direction of motion of the body.

iii) zero when the force acts at right angle to the direction of motion of the body.

A stretched rubber band is an example of a body possessing energy while it is not in motion. The rubber band contains potential energy due to the change in its shape or configuration.

a) Gravitational potential energy of a body depends on:

ii) height to which the body is lifted, h

iii) acceleration due to gravity, g

i. A moving cricket ball has kinetic energy

i) a man climbing up a hill

b) Both potential and kinetic energy

ii) Work done is against gravity = Potential energy gained by the weights, therefore

(a) Work is done when a force applied on a body produces motion in it.

where W is the work done

(a) Work is said to be done when the force applied on a body produces motion in it.

Work done by a body in moving up is given by

where W is the work done against the gravity

m = mass of the body

g = acceleration due to gravity

h = height through which the body is lifted above the ground

(a) When the displacement of a body is at right angles to the direction of foce acting on it, then work done is zero.

(a) Energy is the ability to do work. SI unit of energy is Joule.

(b) Various forms of energy are:

Velocity of one body, v1= v

where, PE is the potential energy of the body,

m is the mass of the body,

g is the acceleration due to gravity,

h is the height above the surface ofearth.

(b) Kinetic energy of a body is due to motion of the body while potential energy is due to position or change in shape of the body.

Work done is more on the bicycle because the truck does not move at all and the bicycle moves through a certain distance. And work is said to be done only when applied force produces motion in the body.

And decreases as the angle is increased.

The work done is zero because the gravitational force acts along the radius of the circular path, at right angles i.e. 90o to the motion of satellite.

The work done by both X and Y are equal because irrespective of whether they reach the top of building by using a spiral or slanted ladder, the vertical distance moved by them against the gravity is same.

The commercial unit of energy is kilowatt-hour.

One kilowatt-hour is the amount of electrical energy consumed when an electrical appliance having power of 1 kilowatt is used for 1 hour.

Megawatt and kilowatt are the units of power bigger than watt.

1 watt is the power of an appliance which does work at the rate of 1 joule per second.

Power has watt as its physical unit

1 kW-h of electrical energy is commonly known as unit of electricity.

At a hydroelectric power station, the potential energy of water is transformed into kinetic energy and then into electrical energy.

At a coal-based thermal power station, the chemical energy of coal is transformed into heat energy, whhich is further converted into kinetic energy and electrical energy.

In an electric bulb, electrical energy is first converted into heat energy and then into light energy

as at point C bob is at maximum height.

b. When a stone is dropped from the roof of the building its potential energy gradually converts into kinetic energy and kinetic energy becomes maximum when the stone is just above the ground

a)Law of conservation of energy states that whenever energy changes from one form to another form, the total amount of energy remains constant. Energy can never be created nor destroyed, it transforms from one form to another. For example, when electrical energy is converted into light energy in an electric bulb, then some energy is wasted as heat during conversion but the total energy remains the same.

b)Initially the pendulum is at rest. The bob is pulled to one side to position B to give it potential energy due to higher position of B and then released, the bob starts swinging

i.When the bob is at position B, it has potential energy but no kinetic energy

ii.As the bob starts moving down from position B to A, its potential energy starts decreasing and kinetic energy starts increasing

iii.When the bob is at position A, it has maximum kinetic energy and zero potential energy

iv.As the bob starts moving down from position A to C, its kinetic energy starts decreasing and potential energy starts increasing 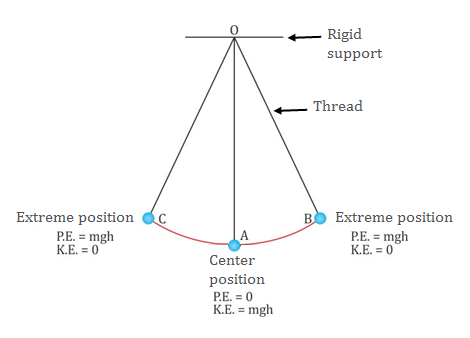 a) Power is the rate of doing work.

SI unit of power is watt(W)

The total energy in all three cases is constant. This proves the law of conservation of energy

a) Electrical energy to sound energy

b) Sound energy to electrical energy