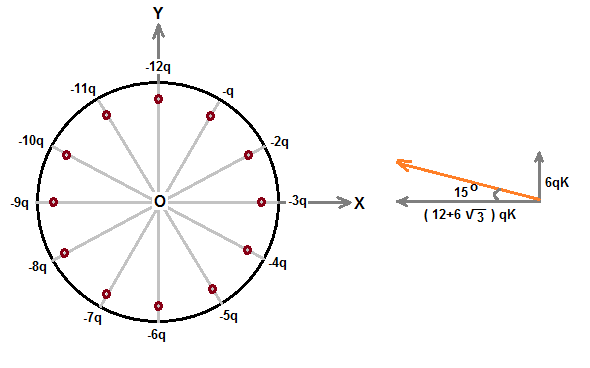 Let us assume the X-axis along the direction from centre of the clock to the number 3 on the dial as shown in figure.
Similarly Y-axis along the direction from centre to number 12 in the dial.
Let us assume a unit +ve test charge is placed at centre. Along the line connecting the number 1 and number 7,
there is a net force of 6q/(4πε0r2 ) from centre to number 7, where r is radial distance from centre to numbers
and ε0 is permitivity of free space. If we resolve this net force along X and Y axis, we get the respective components
as -3qK and -3√3qK, where K = 1/(4πε0r2 ).
Table given below shows the resolved components of net force acting along the lines joining the other numbers.
(angles are measured from X-axis. Anti-clockwise direction +ve, clockwise direction -ve)
After getting all the resolved components we add them to get the resultant force.
Right side of the figure given above shows the net force acting along X an Y direction and the resultant is found to
make an angle 15º with the -ve X-axis direction.  This direction is in between number 9 and 10.
Hence when the time is 9-30, hour hand will be along this direction of resultant force or field direction.
Answered by Expert 25th October 2018, 3:28 AM
Rate this answer

The volume charge density within a volume V is rho (r). What is the force on a small test charge q placed outside the volume having position vector r with respect to the same origin considered to specify the position vector of the charge distribution within the volume.
9th December 2018, 10:40 AM
A) Two charges +4esu and +9 esu are situated at a distance of 10 cm . A unit charge is situated at a point on the line joining the charges.  At what point the unit charge experiences a force which is  (a) equal and opposite,(b)equal and in the same direction? B) Two conductors have resistance R1 and R2 at 0°C. Their temperature coefficients of resistances are a1 and a2 respectively.  Show that the temperature coefficients of their equivalent resistances when joined in series and in parallel are respectively   (R1a1+R2a2)/(R1+R2) and (R1a2+R2a1)/(R1+R2)
7th February 2019, 10:45 AM
Three charges +27 ,-125 ,+64 esu are situated at the corners A,B,C respectively of a rectangle ABCD having sides ABCD having sides AB =8 cm & BC =6 cm . Find the force on charge +5 esu placed at D. Find also the potential at D.
19th February 2019, 1:04 PM
2 identical point charges q each are kept 2 metre apart in air. A third point charge Q of unknown magnitude and sign is placed on the line joining the charges such that the system remains in equilibrium find the position and nature of Q
5th March 2019, 11:10 PM
DO A CHARGED BODY EXERT FORCE ON UNCHARGED BODY ? IF YES WHY ?
24th March 2019, 10:26 PM
RELATED STUDY RESOURCES :
JEE QUESTION ANSWERS