Asked by Arushi Juyal 16th December 2017, 6:51 AM
Answered by Expert
Answer:
This question is very strange to me.
At First, the capcitor is not air-filled/vaccum filled capacitor, because for a capacitor without any dielectric material between parallel plates, we do not have four charged surface as shown in the question. For such a capacitor, top surface of the plate which is connected to positive terminal of battery (or given some postive potential) is positively charged. Similarly the other surface connected to negative terminal has negative charges. Hence only two charged surfaces.
If the capacitor has dielectric material in between parallel plates, in addition to the two charged surfaces as mentioned above, there are two more surface charges due to electric field effect on dielectric material. The figure given below shows the four charged surfaces. 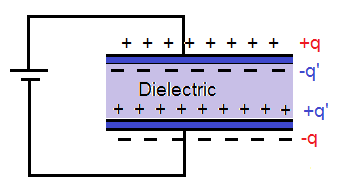 If V is the potential difference between plates and K is dielectric constant, then we have following relation

(Refer any standard physics book like Resnick & Halliday )
A is area of the plate and d is the distance between plates.
if we assume the capacitor given in the question is filled with dielectric, then if we apply this theory given above, the answer to the question is Q1/C.
But this is not mentioned in the list of options.
Answered by Expert 18th December 2017, 10:12 PM
Rate this answer

You have rated this answer 3/10