Home/ Blog /snow white the huntsman is only eye candy

Snow White & the Huntsman is only eye candy

If 'Snow White & the Huntsman' were a person, she'd be a dumb blonde. Breathtaking to look at, but with little soul, the movie is a work of art that you'd be proud to hang in your living room but would avoid discussing with guests. Still, with a cast that 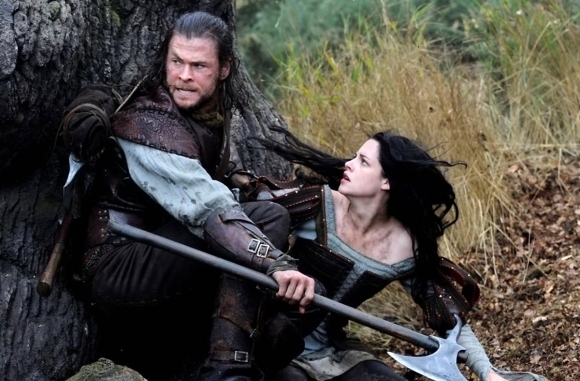 If 'Snow White & the Huntsman' were a person, she'd be a dumb blonde. Breathtaking to look at, but with little soul, the movie is a work of art that you'd be proud to hang in your living room but would avoid discussing with guests. Still, with a cast that'll make men & women both go weak in the knees and CGI that provides a visual awesome effect, it still scores some brownie points.

What's it about?
The movie starts off true enough to the fairytale. In a kingdom far, far away, a queen pricks her finger on a winter rose and instead of running off to find a band-aid, wishes for a daughter with skin as white as snow, lips as red as blood and hair as black as a raven. She's granted a bony baby with just all that, but dies during Snow's (Kristen Stewart) childhood, leaving the King lonely and vulnerable to the charms of Ravenna (Charlize Theron), a prisoner of war. It turns out though that Ravenna is a witch, using her beauty and magical powers to conquer kingdoms and suck the life out of them. Snow's father dies and she's banished to the North Tower until she comes of age. The evil Queen's mirror tells Ravenna that she must eat Snow's heart to stay young forever. Snow fortunately escapes to an enchanted forest and the Queen sends in Eric (Chris Hemsworth), a huntsman, to capture her. The two strike up an uneasy alliance and Eric promises to deliver her to her father's allies. Also hot on her tail, is William (Sam Claflin), Snow's childhood companion and hopeless devotee.

As mentioned before, the film is gorgeous and we're not just talking about knockout triumvirate of Stewart, Hemsworth and Theron. The enchanted forest with its crawling branches, flapping bats and dark wraiths is just as breathtaking as the fairy sanctuary that Snow and her companions stumble into. Hemsworth trades a hammer for a long axe and his Asgardian baritone will leave the ladies swooning. Theron could give fellow Oscar winner Julia Roberts some lessons in how to act the wicked step-mother, her performance far more menacing than Robert's in the other Snow White adaptation that released this year ('Mirror Mirror').

But Stewart, with her lips parted in a pout and wearing a perpetual 'save me' expression, isn't an endearing heroine. She evokes no sympathy - you feel nothing when she gives a rousing speech to raise an army against the queen. Her greatest talent in the enchanted forest is that she can goo goo eye trolls away and look breathtaking even when splattered with mud. The dwarves, save for their leader, are as unlikeable as they've been in other Hollywood adaptations. Towards the end, 'Snow White & the Huntsman' gets sappy and the climax leaves you a tad unsettled, what with all the unrequited love angles still simmering away.

What to do?
The only sense that will be pleasantly assaulted will be your sight. 'Snow White & the Huntsman' is distraction enough, but only watch it if you're a Twi-hard or maybe, a Thor-hard.