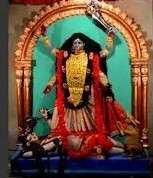 Worship of Kali happens during Diwali

Kali Puja is celebrated in the eastern part of India, and it coincides with Lakshmi Puja on the day of Diwali. This puja is also known as Shyama (night) Puja, as the puja takes place in the middle of the night. While the rest of India celebrates Lakshmi Puja on this day, people in Bengal, Odisha and Assam are involved in the worship of the four-handed fierce goddess Kali.

Kali comes from Kala which connotes black, time and death. Kali is known to be the goddess of time and change. She is considered to be the eternal time. Her foot is set on her consort, Lord Shiva. As a result, it is believed her anger is subdued. She is often considered to be the fierce form of the Goddess Durga. 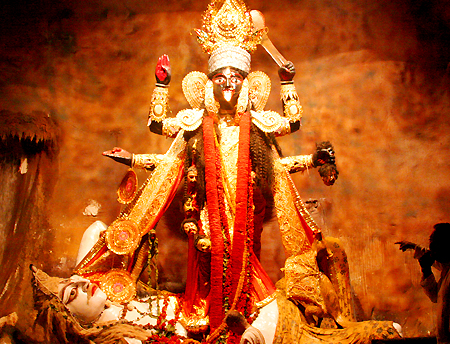 Symbolically, Kali stands for the universe. Like in the universe, the good and the bad coexist, so does the positive and negative forces and so on, even the figure of Kali connotes the same.  She is holding a severed head and a weapon, Kharg, with blood dripping from it on her left hand. With her right hands, she is blessing her devotees and also offering food and grains to the poor. She signifies both life and death. Beneath her feet lies Shiva, who represents the highest form of consciousness, which means that the universe rests on consciousness.

Along with Durga Puja, Kali Puja is the biggest goddess festival in Bengal.

Kali Puja worshipers honour goddess Kali in their homes in the form of clay sculptures and in pandals (temporary shrines or open pavilions). She is worshipped at night with tantric rites and mantras. She is prescribed offerings of red hibiscus flowers, animal blood in a skull, sweets, rice and lentils, fish and meat. It is prescribed that a worshiper should meditate throughout the night until dawn. Homes may also practise rites in the Brahmanical (mainstream Hindu-style, non-tantric) tradition with ritual dressing of Kali in her form as Adya Shakti Kali. Animals are ritually sacrificed on the Kali Puja day and offered to the goddess. A celebration of Kali Puja in Kolkata and in Guwahati is also held in a large cremation grounds where she is believed to dwell in both places.

The pandals also house images of Lord Shiva who lies at Kali’s feet, and Ramakrishna and Bamakhepa – two famous Bengali Kali devotees, along with scenes from mythology of Kali. 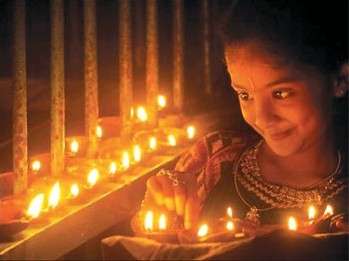 Diwali: The Glue which Binds Billions 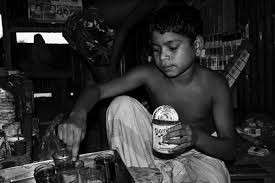 Does Diwali Bring Joy to All?