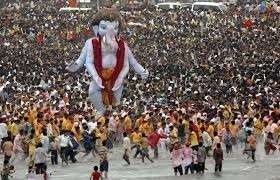 Ganesh Puja is one of the most anticipated festivals in the western and southern coast of India.

Ganesh Chaturthi is celebrated to honour the elephant-headed god, Ganesha. This festival is observed in the Hindu month of Bhadra. The date falls between 19th August and 20th September and goes on for 11 days with great zeal and enthusiasm, ending on Anant Chaturdashi (fourteenth day of the waxing moon period).

People, especially in Maharashtra wait with great anticipation all round the year for the coming of Ganpathi at their homes. It is believed that Ganesha bestows his presence on earth for all his devotees during this auspicious occasion.

‘Ga’ symbolises Buddhi (intellect), ‘Na’ stands for Vijnana (wisdom). So, Ganapati is the master of Buddhi and Vijnana. The universe is sustained by Ganas (gods) and Ganapati is their master. In this world, everybody has a master, but Ganapati has none. He is a master by himself.

This is the birthday of the Master of Masters. Ganapati is also called Mooshika Vahana (one who has a mouse as his vehicle).

Vinayaka is also called Vigneshwara(remover of obstacles). No obstacle can come in the way of the one who worships Him. His worship not only guarantees one with worldly (ambition, wealth, health, etc) but also spiritual success (kind, clear mind freed of any doubt and confusion, etc).

Ganesh or Vinayak Chaturthi is traditionally believed by a lot to be the birthday of Lord Ganesha
source:festivals.iloveindia.com

Dating back to history Ganesh Chaturthi was first celebrated by Chatrapati Shivaji, the great Maratha ruler, to promote culture and nationalism. It is believed to have been the family diety of the Peshwas.

It was around 1893, during the early stages of Indian nationalism, freedom fighter, Balgangadhar Tilak revived the Ganesh Utsav as a social and religious gathering. He was the first to put in large public images of Ganesha in pavilions and establish the tradition of their immersion on the tenth day.

The festival facilitated community participation and involvement in the form of learned discourses, dance dramas, poetry recital, musical concerts, debates, etc. It served as a meeting place for common people of all castes and communities, at a time when all social and political gatherings were forbidden by the British Empire for fear of conspiracies to be hatched against them. An important festival during the Peshwa era, Ganesha Chaturthi acquired at this time a more organized form all over India largely due to Tilak.

Why Maintain an Exam Routine