Home/ Blog /prometheus is bang for your buck

Prometheus is bang for your buck

From the moment the opening scenes play out, you know that Sir Scott's beamed you up for a visual smorgasbord. But as 'Prometheus' walks on the fence between just about good and great, it tilts towards the former side for the most part. As far as the CGI 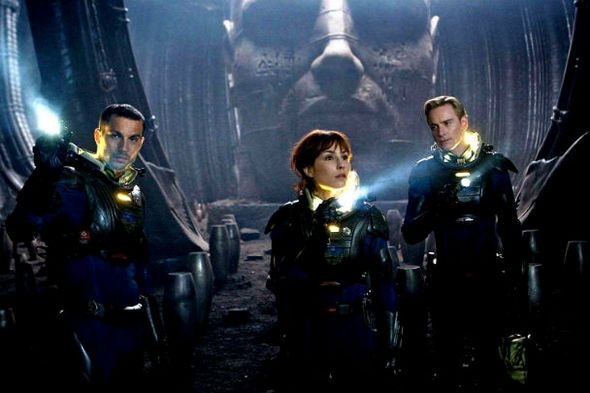 From the moment the opening scenes play out, you know that Sir Scott's beamed you up for a visual smorgasbord. But as 'Prometheus' walks on the fence between just about good and great, it tilts towards the former side for the most part. As far as the CGI goes, we can't find a fault but we've been seeing great effects courtesy the likes of Michael Bay for years now but continue to hold our palms over our faces at the incredibly bad acting and plot holes large enough for elephants to stampede through. Fortunately, 'Prometheus' isn't even a quarter as bad as that, but it's still missing a little something that's hard to place.

What's it about?
After excavations across the world reveal ancient inscriptions of a star map, archaeologist Elizabeth Shaw (Noomi Rapace) and Charlie Holloway (Logan Marshall-Green) convince ageing multibillionaire Peter Weyland (Guy Pearce) to fund a project that will fly them and a crew to a distant moon in the hopes of discovering the origins of mankind. The team is led by an icy commander Meredith Vickers (Charlize Theron) and her right hand man is David (Michael Fassbender), an android built by the corporation in the image of a human. After the team arrives on Christmas Day at their destination, they're initially thrilled by their discoveries, but soon enough they discover that they're not alone (but you knew that already).

Rapace tries to slip into the big, big shoes left behind by Sigourney Weaver, but you take a while before you warm up to Elizabeth Shaw. Marshall-Green has a pretty face, but you're never sure why exactly his character's all broody and moody. But this is Fassbender's show all the way. David is fascinating to watch, and we're not just saying that because of how good Fassbender looks even as a stone-faced robot. His performance evokes all sorts of reactions, from the quite chuckle to the raised eyebrow to the slow shake of the head.

Great CGI deserves a mate like heart, and that's where this blockbuster falls a tad short. Scott does well to build up a story in the first half of the movie but there are more than a few 'hain?' plot moments and you know something's up when the character who evokes the most emotion is a soulless robot. Still, here's hoping that all those unanswered questions are cleared in the sequel(s?) to come.

What to do?
'Prometheus' is your money's worth but don't expect the high to last long after you've walked out of the theatre. We also suggest that you do not watch this movie on a full stomach. The aliens in this movie could well go on to redefine ugly.

Adventures of Tintin: Speilberg’s got it bang on this time