"Nice to be right" says Higgs after particle milestone

The British scientist who gave his name to what is likely to be the Higgs boson particle spoke of his delight at the discovery on Friday, saying it was "nice to be right sometimes".

The British scientist who gave his name to what is likely to be the Higgs boson particle spoke of his delight at the discovery on Friday, saying it was "nice to be right sometimes".

Professor Peter Higgs was making his first detailed public comments since researchers at the European Organisation for Nuclear Research (CERN) announced Wednesday they believe they have found the sub-atomic particle thought to confer mass on matter.

The announcement came following nearly 50 years of research after Higgs published the conceptual groundwork for the elusive particle, nicknamed the "God particle" because it is powerful and everywhere, in 1964.

Asked at press conference at Edinburgh University if he now felt a sense of vindication, Higgs said: "It's very nice to be right sometimes... it has certainly been a long wait."

The modest 83-year-old also brushed off suggestions he would now be in the running for a Nobel Prize as a result of the discovery.

"I don't know, I don't have close friends on the Nobel committee," he said, when questioned about an honour which academics including Professor Stephen Hawking have suggested he should receive.

Asked what he was going to do next, Mr Higgs said he was simply looking forward to continuing his retirement.

"The only problem, I think, will be that I shall have to dodge the press," he quipped. 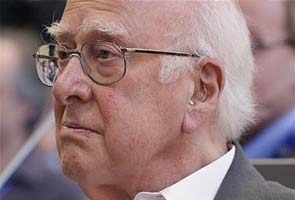 Stunning Photos of Mars ever seen..