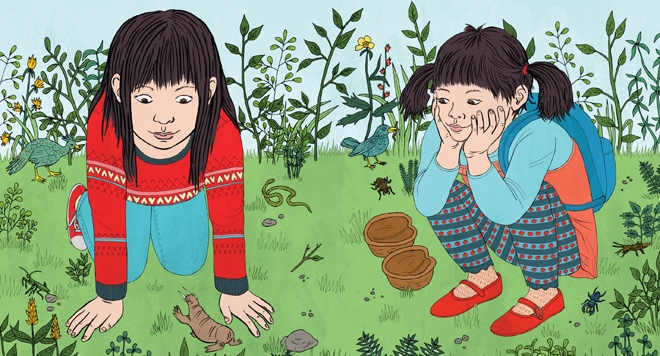 An interior spread of Benny’s Brigade, one of several new releases from the McSweeney’s McMullens children’s imprint.

Last night as I was reading this to my six-year-old daughter: “No,” says Papa. “Because cheese isn’t called cheese: it’s called a music box. And the music box is called a rug. The rug is called a lamp. The ceiling is called floor. The floor is called ceiling. The wall is called door.”

I was thinking, “Is this too weird?” until I saw confirmation that it was definitely just weird enough. Her eyes were huge; she was absolutely enrapt.

So many kids’ books — not to mention grownup ones — feel too much like afterschool specials or sitcoms. You know … pat narratives where everyone makes a mistake, learns a lesson, makes nice, and in the end, comes away a better citizen.

When you’re exhausted at the end of the day and your kid is, too, but is fighting sleep with every fiber of her being, it’s nice to throw kid lit convention out with the proverbial bathwater. When kids tell stories they pay little attention to plot progression or conflict resolution and the stories they listen to don’t have to either. While it is of course very nice to prepare your child for major milestones by reading comforting tales like Kindergarten Rocks, it’s also equally important to blow their minds.

The willingness to embrace stuff that’s unusual, even a bit bewildering, is what makes a story good. It’s fun to read — and to hear — the rollicking brilliance inherent in Dr. Seuss. Even in the childhood classic to end all childhood classics, Goodnight Moon, we get to say goodnight to oatmeal and socks. Kids love this sort of thing — it inspires giggle fits and non-sequitur conversations in a way too many bedtime stories don’t.

The folks at McSweeneys’s McMullens (the children’s book department of McSweeney’s Quarterly & Books) totally get that. They realize that a lot of children’s literature is absurd but not in the way it should be. (It’s absurd, for example, that a child should be saddled with the name of Pinkalicious and not in a compelling sort of way.)

As such, it is genius to republish a book of stories from the ’70s written by Eugene Ionesco, one of the foremost playwrights of the Theatre of the Absurd. The stories in his Stories 1234 (available on Sept. 12) are silly, filled with sentences (and sauerkraut) and drawings that combine enough beauty, confusion and nonsense to captivate any kid.

A spread from Ionesco’s book of stories, about a world full of characters named Jacqueline. Images courtesy McSweeney’s McMullens

They combine realism (mom and dad stayed out too late and don’t feel like getting out of bed) with the fantastical (mom is a flower and she is wearing flowers and flowers come out of her hair), manifested in the dreamlike illustrations by Etienne Delessert (one of the father’s of the modern picture book).

Ionesco’s stories follow the logic pattern of kids, which means they don’t really follow a pattern. This is perfect for young readers who also often, like to take control of the narrative.

There’s no text in Night Riders. Instead, children can make up the story themselves based on the lush narrative illustrations. Images courtesy of McSweeney’s McMullens.

Which is sort of the idea behind Matt Furie’s The Night Riders (published in July, 2012). No words, just pictures. As the book begins, a frog sits down for a bowl full of bugs across the table from his rat friend who is eating salad. The frog, who rides a bike, meets a benevolent dragon, plays a video game, and swims with dolphins. Could anyone have a better day than this frog? No.

The oversize Benny’s Brigade recounts the adventures of a miniature walrus found in a nutshell. Images courtesy of McSweeney’s McMullens
A walrus who got stuck in a nutshell isn’t having such a great day — until the day he is discovered by two sisters who set him free. In Benny’s Brigade by Arthur Bradford and illustrated by Lisa Hanawalt, (published this month) the very tiny walrus (Benny) tells the girls that he’s homesick for the sea. Together with their friends, the sisters build a sturdy boat from a milk carton so he can he set sail for home. His brigade? A trio of adventurous slugs. Saltwater-avoidance hijinks ensue.

All three books have gorgeous, compelling and color-saturated illustrations. None offer meaningful life lessons. These are books designed to get gears turning, to send your kid (or you) running to draw in their sketchbook or outside to dig in the dirt.

Like all McSweeney’s stuff, these are works of art — keepsakes. The dust jackets double as elaborate foldout posters and the hardcovers are embossed and stamped. In other words, these are books that justify the present and future existence of books.

Even as the witching hour gives way to sleepy time, they are too hard to put down.

Bridge of Time By Lewis Buzbee

Why everyone should read Sophie's World