One thing's for certain about 'Madagascar 3: Europe's Most Wanted' - it's going to make animal activists hopping mad. After the furry protagonists escaped to the African mainland in 'Madagascar 2', they're now seen wanting to return to their zoo in New Yo 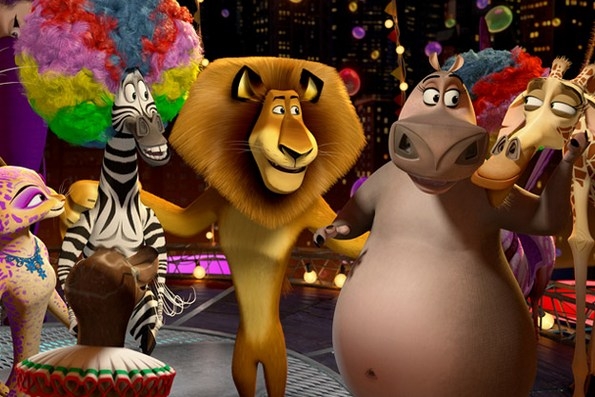 One thing's for certain about 'Madagascar 3: Europe's Most Wanted' - it's going to make animal activists hopping mad. After the furry protagonists escaped to the African mainland in 'Madagascar 2', they're now seen wanting to return to their zoo in New York and end up joining a travelling circus on their way there. Worse, they look happy jumping through hoops and being shot out of cannons. But never mind the sloganeers, did their joie de vivre rub off on us? Well, mostly.

What's it about?
The movie starts off almost right from where the second ended: Alex the Lion (Ben Stiller), Marty the Zebra (Chris Rock), Melman the Giraffe (David Schwimmer) and Gloria the Hippopotamus (Jada Pinkett Smith) long to return to their New York home, and follow the crafty crew of penguins to Monte Carlo in the hopes of hitching a ride back to America. Wrecking havoc at a local casino puts them on the hitlist of animal control officer Chantel DuBois (Frances McDormand), who's hungry to have Alex's head nailed to a plaque and hung on her wall of conquests. They find refuge in a travelling circus where they make new friends, that include a Russian tiger (Bryan Cranston), an Italian sea lion (Martin Short) and a Latina jaguar (Jessica Chastain). It's now up to the awesome foursome revive the woeful circus act, return to America and shake Dubois off their tail (quite literally).

'Madagascar 3' has its moments and they're mostly courtesy the sea lion Stefano, who takes over from Marty's position as the annoying talking animal. The sinister penguins remain deviously delightful. The romantic track between King Julien (Sacha Baron Cohen) and a dancing bear Sonya is also funnier to watch than the retch-worthy moments between Melman and Gloria.

But it's camaraderie between the original four that's missed and how. Apart from one early scene in a casino, there are hardly any exchanges between them, and only them, that are worth mention. Save for Alex, the other three are sidelined to make way for new characters and it becomes a bit of a muddled mess, where old favourites fade into the background. The 3D effects are also wholly unnecessary - there's nothing jumping at you from the screen that couldn't have been just as effective in 2D.

What to do?
Colourful and mildly entertaining, 'Madagascar 3' should be watched with low expectations for a most agreeable movie experience. It's also a safe bet for kids - their last summer treat at the theatres before it's time to go back to school.

in.com rating: 3/5
By in.com
Next Article

Prometheus is bang for your buck