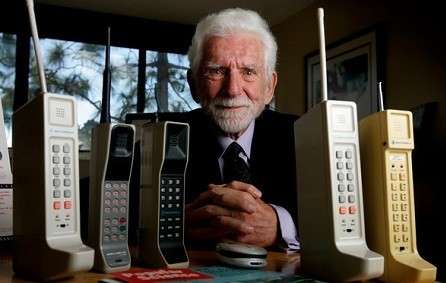 Let us look at the evolution of mobile phones from the first commercially available phone.

The world’s first mobile phone call was made by Martin Cooper, a senior engineer at Motorola on 3rd April 1973. Martin called a rival telecommunications company and informed them that he was speaking via a mobile phone. The handset which Martin used weighed 1.1 kg. Moreover, it gave about 30 minutes talk time and took 10 hours to get fully charged.

A lot has happened in the mobile industry since that call. However, very few phones have managed to set their brands. Let us look at the evolution of mobile phones from the first commercially available Motorola DynaTAC to the Apple iPhone of today.

The Motorola DynaTAC 8000x (Dynamic Adaptive Total Area Coverage) was the world’s first commercial cell phone. Throughout the DynaTAC era, this cell phone had become a regular feature in mass media, making it a symbol of wealth and the future.

StarTAC was the first ever clamshell/flip-style mobile phone. It was among the first mobile phones which gained popularity; approximately 60 million handsets were sold during that time.

BlackBerry 850 was the first BlackBerry device which was introduced as a two-way pager device. This small device featuring a monochrome screen also supported e-mail and limited HTML browsing. The handset used the DataTAC network which worked on the Microsoft Windows 95/98/2000 OS.

Nokia 3310 was a largely popular phone in the mid-to-late 90s. This phone was regarded as a milestone in Nokia’s career. Even in 2013, many regard Nokia 3310 as the best mobile phone ever created in history. Many people called it indestructible because of its strength and durability.

Long before Samsung took over the android market of mobile phones, it had made a handset which was the first phone ever to be made using a thin-film transistor active-matrix LCD. Two features which distinguished it from the other phones were its four-way navigation keys and a dynamic front screen.

After innumerable changes over fashion and design, Motorola shifted to making the best-selling clamshell handset in history. Because of its striking appearance and thin body, it was instantly featured as an exclusive fashionable phone. V3 was the first and main phone of the Razr series.

This was the first BlackBerry handset which had Wi-Fi, and the main reason for its widespread use was the BlackBerry Messenger feature which attracted many professionals and teenagers.

LG Shine was the slider-style mobile phone manufactured by LG Electronics. It featured a polished-metal exterior and stainless steel case. Instead of touch controls, the mobile phone had up and down navigation and two buttons for side-to-side navigation.

Apple iPhone 3G needs no introduction. Apple is largely responsible for changing the face of smartphones forever. The iPhone was responsible for breaking new ground in terms of design, screen touch and overall finishing. However, this was just the beginning. At present, iPhone seems to be ruling the smartphone market.

Advertorial: Show the world that you care

More from Science and Technology