Euro 2012: How Portugal can beat Spain

The ultimate question, the unsolved mystery, the problem which has no definite answer: how to beat Spain. 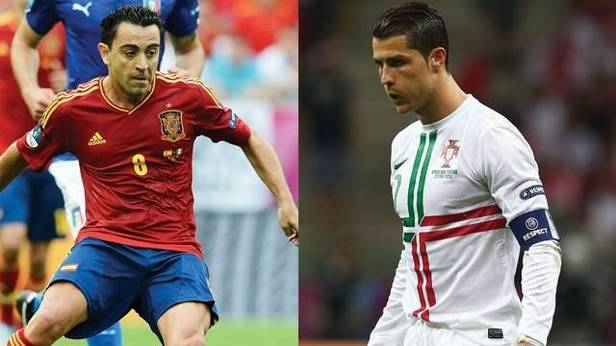 The ultimate question, the unsolved mystery, the problem which has no definite answer: how to beat Spain.

Since their triumph in Euro 2008, Spain have virtually been unbeatable. This is not a golden generation… this is a generation of absolute genius’ which threatens to keep producing more of them at the highest level.

But in front of them stands a Portugal side intent on killing of the demons of Euro 2004, and beating a Spanish side on the way to the final will be the most epic achievement.

In sport, a side can never allow another to win before they get off the bus. If you let that happen, then there will be no chance of triumph. Portugal must try and believe they can win.


Sit back, concentrate, absorb: You don’t need star defenders to keep out Spain. You need defenders who are mentally strong (remember Chelsea against Barcelona), who can concentrate and refrain from charging up the pitch or making wild tackle. For one, Pepe will be vital to this after playing against Barcelona for Real Madrid. The same will stand for Fabio Coentreao. Joao Perreira, who has a tendency to go charging up will also need to curb himself.

Counterattack with direct, successful passes: One might have praised Portugal for their counterattacking against Netherlands and Czech Republic, but it is hard to do so when you have just 35% of the ball possession. Fortunately for Portugal, their passers in the middle — Miguel Veloso, Joao Moutinho and Raul Meireles are pretty accurate. To do it against Spain’s quick-press is different, but add a little Portuguese ‘Two Steps Waltz’ and that might help in beating the marker and releasing the wingers.

Spain can’t counterattack- so crowd the box in set-pieces: Don’t be surprised – Spain cannot counterattack. They have a way of building up to a goal and rarely move away from it. Their fastest players are David Silva, Jesus Navas and Fernando Torres (out of whom two don’t really start). They avoid one-on-ones and long balls apart from the occasional wing-change. Their long balls forward against the Republic of Ireland had a 0% success rate (stat via FourFourTwo Statzone)- now go eat that. For Portugal, they should throw men forward… all of them but three and reap the rewards. Spain is a short team and will suffer. And with Nani and Cristiano Ronaldo winning tons of freekicks, this might just happen.

Take shots and look for rebounds: If Spain have an off day (which they haven’t had since the last four odd years), then Portugal can hope for a clean goal. But otherwise, a scrappy goal is more realistic. Something on the lines of a long shot spilled by Iker Casillas and falling to an attacker who bundles it in. After that, park the Boeing.

Stat-wise, Portugal have taken 63 shots in their four Euro 2012 games, out of which 30 have hit the target. That is an almost 50% on-target rate, which they need to continue doing.

The Ronaldo-Nani effect: These two, along with Coentreao will be the fastest players on the pitch. Swap them from right to left, from left to centre, from right to centre in every other possible combination to confound Gerard Pique while he is taking a peek at Shakira in the stands. On a serious note, Ronaldo needs to rewind back to his training against Sergio Ramos and Alvaro Arbeloa and tell his mates what to do to beat them. Or maybe keep it a secret, use the knowledge himself and score.

Shock exit for Venus in Wimbledon Round 1