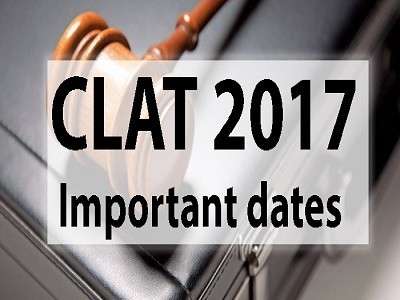 The CLAT is a centralised admission test for admission to 18 prominent National Law Universities in India. Read to know about the important dates for CLAT 2017, the eligibility criteria and the paper pattern.

The Common Law Admissions Test (CLAT) is conducted by the National Law Institutes of various cities in the rotation basis. CLAT 2016 was conducted by Rajiv Gandhi National University of Law (RGNUL), Patiala on 8 May. CLAT is a centralised admission test for admission to 18 prominent National Law Universities in India.

The CLAT will test your knowledge of:

The 18 participating NLUs in the order of their year of establishment are:

Education: A candidate should have obtained Higher Secondary School/ Intermediate (10+2) or its equivalent certificate from a recognized Board with not less than 45% marks in aggregate (40% in case of SC/ST candidates), as prescribed by the respective Statutes of the participating Universities

Age: A candidate should be below 20 years of age as on 01st July 2017 (22 years in case of SC/ST and Persons with Disability candidates, as prescribed by the respective Statutes of the participating Universities

Reservation for UG/PG Programme: As per the Statutes of respective participating Universities; details may be seen in the prospectus of the respective University appended herewith

The CLAT-2016 Question Paper for UG courses will have MCQs as per the following scheme:

In the case of equal marks secured by candidates, the procedure to break the tie will be as per the following order:

Some Private Institutions that use CLAT Scores

Finally, there are some institutions which are not participants of CLAT, but they choose to continue with their existing system.

Also Read: Law as a Career in India

Courtroom Drama and More: Pursuing a Legal Career in India