Joe Wos, a Pittsburgh-based cartoonist and performer, is currently working on what he hopes will be the new world's largest most difficult hand-drawn maze.

Joe Wos, a Pittsburgh-based cartoonist and performer, is currently working on what he hopes will be the new world’s largest most difficult hand-drawn maze. Creating this thing is one daunting task, but nowhere as difficult as finding someone willing to spend approximately 40 hours trying to solve it.

Like all children, Joe Wos loved to doodle when he was young boy. He grew up to become an cartoonist, and as he approached 40 years old, he felt the need to achieve some “lifelong goals”, one of which was setting a Guinness record. He remembered that as a kid, he would create mazes on huge pieces of paper that often ended up on the walls of his home, and realized that could be his shot. After doing some research he learned Guinness had other maze-related records so he asked them if they were willing to acknowledge the world largest hand-drawn maze. They accepted, but with a number of conditions: Wos’ maze would have to be at least 10 square meters in size, it would have to be solvable, and drawn by him alone. Also, he needs five witnesses every time he goes to work on it. The 42-year-old cartoonist started this monumental project on July 27 and hopes to complete his intricate masterpiece by the end of September. ”It’s not easy,” he told the Huffington Post. ”One path has to remain open, but I have to keep about five paths available just in case I draw myself into a wrong path. And that will be terrible for the person who actually solves the maze because they may spend up to 30 minutes going down a wrong path as well.” 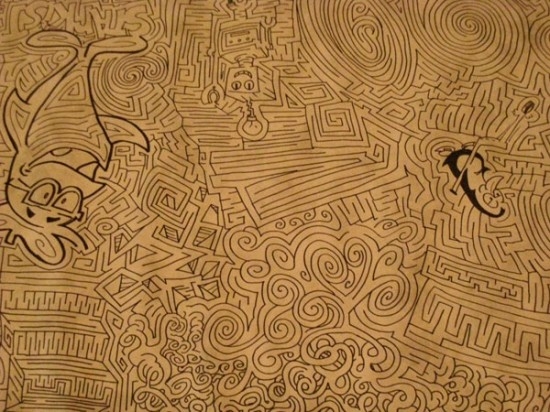 When working on amaze this size, it’s impossible to avoid mistakes, so whenever Joe Wos closes up a path, he turns it into an illustration. One time, he worked for 20 minutes on drawing a factory, before realizing he had closed off the exit. So he put an “out of order” sign on it and continued from another open spot. So far he has worked over 50 illustrations into his giant maze, including some from paid sponsors, whose donations have allowed him to raise funds to take the artwork to museums and fairs. If you’re wondering why it’s taking him so long to finish his maze, Wos said: “I can’t do it at hour-long stretches. I need complete concentration to do this.”

He also needs someone to actually spend between 30 and 40 hours solving the maze. He asked his friends and family, but they all declined the offer. Then he turned to a fellow board member on the ToonSeum, a small Pittsburgh cartoon museum, but he also said no. Finally he posted a plea on Facebook, but that also remained unanswered. Now, after his story was featured in the Wall Street Journal, Wos received about 20 emails from people across America willing to solve his maze. He’s considering taking the thing on a tour, so they can each have the chance to solve it in their own cities. Although there’s a small chance Wos inadvertently seals the winning path, he says he’s 99,4% sure it will be solvable.

7 reasons why markets and rupee are rejoicing today