Several educational institutions in the Telangana region, including in Hyderabad, are closed following the bandh call by pro-Telangana groups.

Several educational institutions in the Telangana region, including in Hyderabad, are closed following the bandh call by pro-Telangana groups.

The State Road Transport Corporation said it had not cancelled bus services, but rescheduled them in some areas of the city. South Central Railway sources said some of the train services in the region were cancelled. MMTS (Multi-Modal Transport System) services in the city have said that they will not operate till afternoon.

The Osmania University has already postponed examinations that were scheduled for today.

The bandh called on Sunday saw thousands of protesters defy prohibitory orders and join the ‘Telangana march’ to press their demand for a separate state.

Police Commissioner Anurag Sharma said late on Sunday that “left-wing extremist groups” have infiltrated the movement and were suspected to be behind the violence. He said that SP (Intelligence) Rajashekhar was seriously injured in the clashes, which also left an inspector and 17 constables with injuries. Five protesters were injured, he added.

“There are inputs that some Left-wing extremist groups infiltrated the movement leading to attacks on private properties and other damages,” Sharma told a press conference in the backdrop of violent clashes. 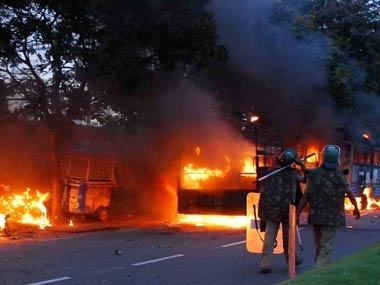 Sharma said the Telangana Political Joint Action Committee (JAC) went back on its word to organise a peaceful march, and claimed that police exercised maximum restraint in quelling the protests that involved damage to property and arson. ”We tried our best by making all arrangements and even gave the protesters specific areas, routes towards the venue – Sanjeevaiya Park on Necklace Road, but some of them tried to break the barricades at Tank Bund where immersion of Ganesha idols was going on. They also violated prohibitory rules and when the police objected, they threw stones at the police,” Sharma said.

Some 25 police vehicles were damaged – of which three were torched, Sharma said. Several people, including some TDP MLAs, who were staging a dharna outside the Secretariat, had been taken into preventive custody, he added.

Violating prohibitory orders, the Telangana supporters headed towards the Necklace Road at Hussain Sagar lake, the venue of the event, and clashed with security personnel on their way. Incidents of violence were reported from the Osmania University campus, Khairatabad and the Andhra Pradesh Secretariat.

When they were stopped from passing by the Secretariat road and some other areas where prohibitory orders were in place, the protesters pelted stones and tried to remove the barricades which prompted the security personnel to lob tear gas shells after trying to chase them away.

On Sunday night, the JAC asked its supporters to stay put at the venue of the ‘Telangana march’ here to put more pressure on the government for announcement of separate state.

Congress MPs from the Telangana region were detained by the police when they staged a dharna at the camp office of Chief Minister N Kiran Kumar Reddy as they were not allowed to meet him over the detention of Telangana supporters. The MPs, including Manda Jagannadham, Madhu Yashki Goud, G Vivek, Gutta Sukhender Reddy, Rajaiah, and former MP K Keshav Rao protested after they were refused permission.

The Police Commissioner said the protesters had indulged in “largescale violence and arson” despite the JAC promising to stage a peaceful rally. He said they damaged rail tracks and cabins, pelted stones at trains and damaged two vans of Telugu news channels. Some private property was also attacked.

The bandh called for Monday may affect schools, colleges and other educational institutions.

“Protesters were directionless on their way towards the venue. They tried to proceed through prohibited areas,” Director General (law and order) S A Huda said. ”We have been monitoring the situation. It is tense but under control,” he said. Two police vehicles were set ablaze at People’s Plaza on the Necklace Road, police said.

Violence erupted on the Osmania University campus here after pro-Telangana students clashed with police when they were prevented from taking out a rally to join the ‘Telangana March’.

Police used water cannons and lobbed teargas shells on pro-Telangana supporters near the venue as some of them defied prohibitory orders and proceeded towards the Secretariat.

Permission was granted to organise the ‘Telangana March’ from 3 pm  to 7 pm at the Necklace Road, after talks were held between the government and the JAC.

Addressing the protesters at the venue, JAC Chairman M Kodandaram asked them to stay on at the venue. ”We are asking for announcement of roadmap on accepting the Telangana demand. Let’s sit here as long as we can. We are not troubling anybody by sitting here,” he said.