India has been breeding a champion in the North East. She goes by the name Mary Kom. 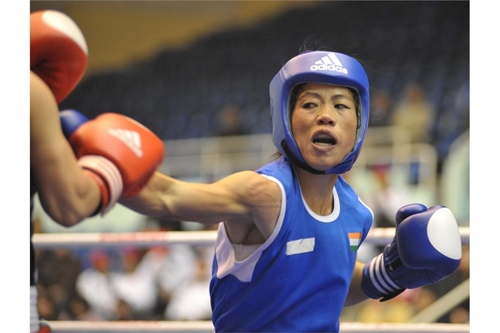 India has been breeding a champion in the North East. She goes by the name Mary Kom.
She says, ‘I have achieved a fair bit in life, yet the long-cherished dream has been an Olympic gold. From the time this thought has entered my mind, it has become the Everest that I want to scale and scaling this will set me free.’

This 29-year-old star boxer and mother of twin boys is a pioneer in her field, a domain considered largely a sport for men, but is also emerging as the new poster girl of Indian sports overall. Recently, SportsPro, a monthly British magazine, named her as the 38th most marketable athlete in their list of the world’s 50 most marketable athletes. She added another feather in her cap by becoming the first woman to hold the honorary rank of lieutenant colonel in the Territorial Army. The same rank is held by former cricketer Kapil Dev, Indian cricket team Captain Mahendra Singh Dhoni, and shooter Abhinav Bindra.

Coming from a poor family in India’s Northeast state of Manipur, Kom struggled to make ends meet; she was passionate about being an athlete.
These weren’t the only hurdles that came in her way, resistance from within her family was also very strong as they felt that she could get disfigured and hurt and her chances of getting married would reduce. But Kom overcame all these societal and familial pressures and emerged victorious. Kom is the first woman boxer from India to have won Five world Titles consecutively. She has more than three Asian titles and eleven National titles under her belt. She is a recipient of the Arjuna Award, the Padma Shri Award, the Rajiv Gandhi Khel Ratna Award and a special award from AIBA.

With excerpts from Anupam Nath’s article, “A Star Rises in the Northeast” , Associated Press