6 Endangered Animals in India That You Should Know About 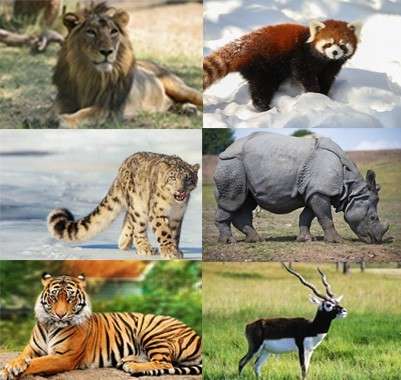 Here is a list of few endangered animals which you can find in different parts of India.

India is still home to some of the most beautiful creatures in the world. But over the past few centuries because of deforestation, wild animals have lost their habitat and have reached a phase of getting extinct. Some species are left in such few numbers that our next generation will not be able to see them. We need to do our bit to conserve more species. Here is a list of few endangered animals which you can find in different parts of India.

The Bengal tiger is the national animal of both India and Bangladesh. The tiger’s coat is yellow to light orange with stripes ranging from dark brown to black. This tiger subspecies is found across the Indian subcontinent. The number of tigers has reduced considerably in the past because of poaching and deforestation. There are hardly few tigers left at the Tadoba National Park of Maharashtra, the Ranthambore National Park and Sariska Tiger Reserve of Rajasthan, the Jim Corbett National Park of Uttarakhand and the Bandhavgarh National Park of Madhya Pradesh.

The Asiatic lion is known as the Indian lion or Persian lion. It is a lion subspecies found in Gujarat. Because of human activities such as agriculture and deforestation, the Gir National Park of Gujarat is the only place where this magnificent animal can be spotted today. They feed on wild pigs, cattle and deer in the wild. According to the 14th Lion Census, the Gir sanctuary has only 553 Asiatic lions left.

Snow leopards are large cats native to the mountain ranges. They have long, thick fur and their base colour varies from smoky grey to yellowish tan. They have powerful legs and are able to jump as far as 50 feet (15 metres). They usually use their long tail to cover their body against the brutal cold of the mountains. They thrive on smaller animals such as rodents, hares and birds. In India, they can be spotted at the Nanda Devi National Park of Uttarakhand and the Dibang Wildlife Sanctuary of Arunachal Pradesh.

The blackbuck is the only representative of the antelope genus found in India. It is one of the most attractive animals found throughout the plains of India. Because of extensive human pressure for housing, the blackbuck populations have reduced drastically. Now they can only be spotted in few protected areas such as the Guindy National Park of Tamil Nadu, Rollapadu in Andhra Pradesh and Chilika in Odisha.

The red panda also known as lesser panda or red cat-bear is a small mammal native to the eastern Himalayas. This panda typically grows to the size of a house cat and spends most of its life on trees. It is most active in the gloaming hours of dusk and at dawn. The red panda is the prime victim of deforestation. Its natural space is shrinking as more forests are being destroyed for agriculture. Few pandas are left in the Khangchendzonga National Park of Sikkim, the Namdapha National Park of West Bengal and in some parts of Arunachal Pradesh.

The greater one-horned rhinoceros is a huge mammal found in Assam. The animal has extensively reduced in number because of excessive hunting. They are blessed with an excellent sense of hearing and smell but have relatively poor eyesight. These rhinos are killed for their horns, which are sold at a high price. Assam is the only home to the largest population of greater one-horned rhinos of which more than 90% of their population is in Assam’s Kaziranga National Park.

Also Read: Facts about Animals that will Blow your Mind

10 Highest Mountains in the World