The superhero fan following is increasing at a rapid pace with a slew of movies making it out from the West. From the Avengers to DC Comic's Batman in the Dark Knight, the superhero franchise is also making it big on the mobile gaming front. For the comic

The superhero fan following is increasing at a rapid pace with a slew of movies making it out from the West. From the Avengers to DC Comic’s Batman in the Dark Knight, the superhero franchise is also making it big on the mobile gaming front. For the comic book fans, here are five Android games based on some of today’s most popular characters.

Based on Christopher Nolan’s finale to his Dark Knight trilogy that only recently hit the big screens, this mobile game may be pricey but is quite worth it. Playing as the Batman desperately trying to protect his beloved Gotham City, you’re up against all kinds of obstacles with missions that range from hostage situations, jailbreaks and car chases all of which come with quite a full range fight system for a mobile device. Of course, allies such as Lucius Fox, Batman’s gadget specialist, Selina Kyle aka Catwoman and Police Commissioner Gordon will have your back. Naturally, you’ll have access to Batman’s famous utility belt and all his goodies. You’ll even get to test drive his various vehicles to get from point A to point B. 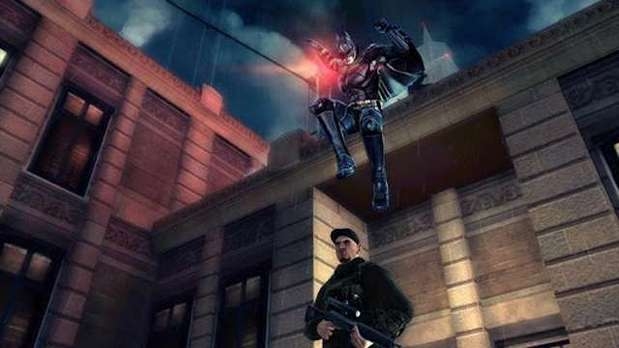 Drop down on enemies in silence

If you’re feeling a bit retro, X-Men is a great way to get that nostalgic gaming feeling on your Android powered Smart device. The graphics and characters' costumes are based on the comics that were out during the early 1990s. The whole gang is on board from Wolverine sporting his earlier Brown X-men costume to Cyclops, Colossus, Storm, Nightcrawler and Dazzler. From battles with Sentinels, you can also take on the likes of the X-Men’s arch enemies such as Juggernaut, Mystique, Pyro, The Blob and even Magneto himself.  The game also includes a Wi-Fi based multiplayer feature as well.

The Amazing Spiderman is the next game from veteran mobile game developer Gameloft that’s based on a 2012 movie release. Swinging through the busy streets of New York City, our friendly neighbourhood web slinger will be pitted against one of his arch nemesis, the Lizard, following the movie plot. If you’re just looking to explore one of the greatest cities in the world, the game also allows you to ‘swing’ by locations and districts like Central Park, Downtown New York and residential neighborhoods. Gameplay will allow you to move about the city just like Spidey from climbing to jumping and swinging with some pretty interesting fight sequences thrown in to beat up on the occasional bad guys and minions.

Swing through the air with the greatest of ease

Play as the very first Avenger fighting against the evil HYDRA minions. In this side scrolling-like action packed game, you can also power up your Shield and use it very effectively as a weapon to take down enemies in your way. The combo attacks system is quite entertaining to play through. Run, slide, jump and do mid-air take downs as the good Captain. A few extras like comic book panel style cut scenes adds that little bit extra for overall gameplay.

HYDRA doesn't stand a chance against the first Avenger

One of the most beloved comic book characters of our time who recently made it out into his very own 3D animated full length movie is Tintin. You can play the intrepid reporter as he tries to solve the mystery of the Unicorn and find the treasure. Levels also include playing as Sir Francis Haddock, the swashbuckling captain of the Unicorn as he takes on red Rackham the Pirate. With stunning 3D graphics for high-end smartphones, the Adventures of Tintin makes for compelling gameplay. You’ll also get to pilot a plane, solve puzzles and even have a camel race in the desert. That’s quite a bit of entertainment packed in one space.

Find the secrets of buried treasure

While there are plenty of high-end games out there for smartphones of all calibre, these are some great options of the ardent comic book fan.

Having Trouble Sleeping? Your Tablet or Smartphone Could Be to Blame