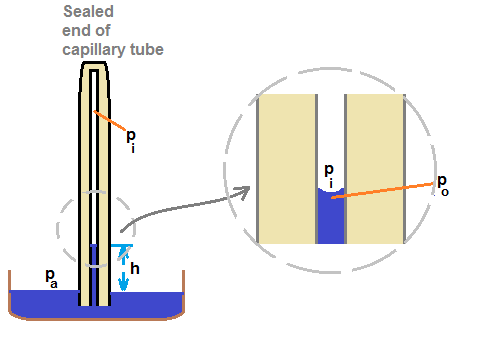 Figure shows the capillary rise phenomenan in the capillary tube in which one end of the tube is sealed.
if S is surface tension force of the liquid, then we have  pi - po =

where r is the radius of curvature of miniscus, d is diameter of capillary bore and θ is the angle of contact.
if the capillary tube has air initially at atmospheric pressure, then air is compressed, its volume decreases and
pressure slightly increased due to capillary rise. At constant temperature pressure is inversely proportional to volume
but volume of air inside capillary tube is directly proportional to length of air column.
Hence we have ,