What will be time period of revolutionof earth if the distance between sun and earth is halved? Give shortcut way

According to Keplers third law of planetary motion, "the square of the period of revolution of a planet around the sun is proportional to the cube of the semi major axis of the ellipse".
Let T1 and R1 be original time period and radius of revolutions of Earth's orbit around Sun and
T2 and R2 be the time period and radius after the distance between Sun and Earth is halved. 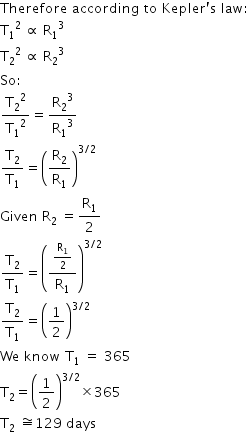 Therefore if the distance between the earth and the sun were half its present value,
the number of days in a year would have been 129 days