What is the definition of Solvays process with the equations ?

Expert Answer
Dear Student
A process used to produce large quantities of sodium carbonate from sodium chloride, ammonia, and carbon dioxide.
The steps in the Solvay Process are:

Brine Purification
Brine is concentrated by evaporation to atleast 30%
Impurities such as calcium, magnesium and iron are removed by precipitation, eg,

Brine solution is then filtered and passed through an ammonia tower to dissolve ammonia.
This process is exothermic, releases energy, so the ammonia tower is cooled.

Carbon dioixide is produced by the thermal decomposition of limestone, CaCO3(s), in the lime kiln:

Carbon dioxide is bubbled through the ammoniated brine solution in the carbonating tower.
The carbon dioxide dissolves to form a weak acid:

The ammonia in the brine reacts with H+ to form ammonium ions:

The HCO3- then reacts with the Na+ to form a suspension of sodium hydrogen carbonate:

NaHCO3 precipitates because of the large excess of Na+ present in the brine which forces the equilibrium position to shift to the right by Le Chatelier's Principle (NaHCO3 is quite soluble in water).
The overall molecular equation for the formation of sodium hydrogen carbonate in the carbonating tower is:

The net ionic equation for the formation of sodium hydrogen carbonate in the carbonating tower is:

Suspended sodium hydrogen carbonate is removed from the carbonating tower and heated at 300oC to produce sodium carbonate:

The carbon dioxide produced is recycled back into the carbonating tower.

CaO is formed as a by-product of the thermal decomposition of limestone in the lime kiln.
This CaO enters a lime slaker to react with water to form calcium hydroxide:

The calcium hydroxide produced here is reacted with the ammonium chloride separated out of the carbonating tower by filtration:

The ammonia is recycled back into the process to form ammoniated brine.
Calcium chloride is formed as a by-product of the Solvay Process.

ANSWERED BY EXPERT
CBSE 11-science - Chemistry
While preparing Sodium fusion extract, why is the capillary tube immersed in water and broken when you can just pour it to cool it down? 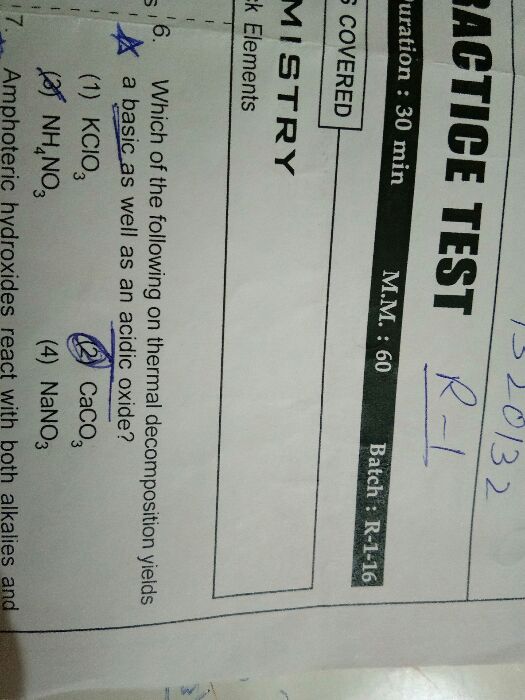 ANSWERED BY EXPERT
CBSE 11-science - Chemistry
A and B are two salts. A with Dil. HCl and B with conc. H2SO4 react to give reddish brown vapours, hence A & B respectively are: