Huygens principle states the following:
Each point of the wavefront is the source of a secondary disturbance and the wavelets emanating from these points spread out in all directions with the speed of the wave.
These wavelets emanating from the wavefront are usually referred to as secondary wavelets and if we draw a common tangent to all these spheres, we obtain the new position of the wavefront at a later time.
Huygens’ principle is essentially a geometrical construction, which gives the shape of the wave front at any time, allows us to determine the shape of the wavefront at a later time.
Wave-front of a wave, at any instant, is defined as the locus of all the particles in the medium which are being disturbed at the same instant of time and are in the same phase of vibration.
Construction of wavefront when light travels from denser medium to rarer medium: 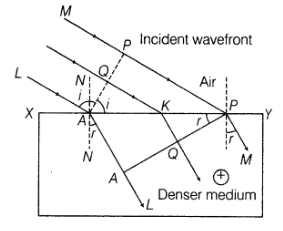 The rays from different wave pointson the incident wavefront will take some point to reach the corresponding points on the refracted wavefront.
This is better explained by the following equation: