Expert Answer
Geometry is used everywhere. Everywhere in the world there is geometry, mostly made by man. Most man made structures today are in a form of Geometric. How, you ask? Well some examples would the a CD, that is a 3-D circle and the case would be a rectangular prism. Buildings, cars, rockets, planes, maps are all great examples.
There are many jobs in the world today that requires Geometry, one such job is a computer programmer. A computer programmer really need to know his geometry as well as many other math.
Another job would be an architect, these people are the ones who measure and design buildings to have built. They are usually hired to measure the land and make a sturdy building for a company.
Man-made structures that includes geometric structures would be almost everything. If a person looks closely, they would see many geometry in the structure. There are too many items to list. Buildings, cars, rockets, ships, windows, books, disks, plates are all geometric structures.
Nature even has their own geometric structures. The world is a big sphere, so is the moon and the other 8 planets in this solar system. The whole universal is a geometric structure. Measurements on maps are geometric. Which proves that not only man-made objects are geometric. It proves that even nature has geometry and that geometry exist even in things a human cannot see, just know it's there.
Let me briefly describe a few more areas where geometry being used.
(a) Computer graphics is based on geometry - how images are
transformed when viewed in various ways.
(b) Computer-aided design, computer-aided geometric design.
Representing shapes in computers, and using these descriptions
to create images, to instruct people or machines to build the
shapes, etc. (e.g. the hood of a car, the overlay of parts in a
building construction, even parts of computer animation).
(c) Robotics. Robotic vision, planning how to grasp a shape with
a robot arm, or how to move a large shape without collission.
In (b) and (c) there is a field called 'computational geometry'
that involves algorithms for how to efficiently do these
calculations. There are many interesting issues and problems,
some of which can be understood in high school math.
(d) Medical imaging - how to reconstruct the shape of a tumor from
CAT scans, and other medical measurements. Lots of new
geometry and other math was (and still is being) developed for
this.
(e) Structural engineering. What shapes are rigid or flexible,
how they respond to forces and stresses. Statics (resolution
of forces) is essentially geometry. This goes over into all
levels of design, form, and function of many things. I have
attended some interesting architecture and design conferences
where all of this flows together - sometimes (in North
American culture) with people knowing too little geometry to
do some of the things well.
(f) Protein modeling. Much of the function of a protein is
determined by its shape and how the pieces move. Mad Cow
Disease is caused by the introduction of a 'shape' into the
brain (a shape carried by a protein). Many drugs are designed
to change the shape or motions of a protein - something that we
are just now working to model, even approximately, in
computers, using geometry and related areas (combinatorics,
topology).
(g) Physics, chemistry, biology, .... . Symmetry is a central
concept of many studies in science - and also the central
concept of modern studies of geometry. Students struggle in
university science if they are not able to detect symmetries of
an object (molecule in stereo chemistry, systems of laws in
physics, ... ).
Here are a few more professions that depend on geometry
Land surveyors use basically geometry.
Two other occupations that have long depended on geometry are
navigation (figuring out how to get from point A to point B, and
knowing where one is at all times along the way) and astronomy.
Engineers who design all kinds of structures, from bridges to
airplanes to automobiles, use geometry to help determine the
stresses and strains of each part of a structure so that all
parts of the structure can be made strong enough.
The people who write the computer software to produce the animated
films

Answered Unanswered My Questions My Answers
CBSE 10 - Maths
Some student planned a picnic. The budget for the food was â¹480.as eight of them failed to join the party, the cost of the food for eachember increase by â¹10 find howany student went on the picnic

ANSWERED BY EXPERT
CBSE 10 - Maths
Given that sin tita =a/b,then tan tita is equal to

ANSWERED BY EXPERT
CBSE 10 - Maths
if one zero of the polynomial is (aÂ²+9) xÂ²+13x+6a is reciprocal of the other ,find the value of a 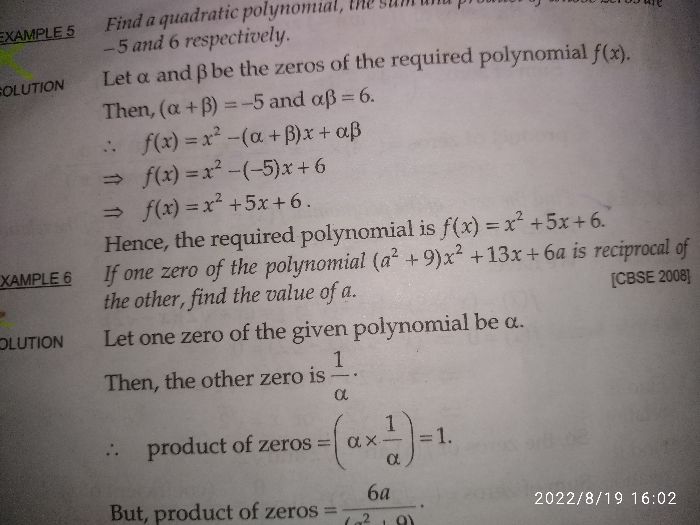