Hydroboration- oxidation process is a method of preparation of alcohols. In this method, diborane (B2H6) is reacted with an alkene. trialkyl boranes are formed as  the addition product. This on oxidation with hydrogen peroxide in the repsence of aqueous sodium hydroxide forms the alcohol.

The product alcohol looks like that it is formed due to anti Markovnikov's addiition since hydrogen is attaching itself to the carbon with lesser number of carbon atoms but actually it is a markovnikov's addition.

Expalnation: Since here  the negative part is (H-) and BH2+ is positive. So, BH2+ gets attached to the carbon with more carbon atoms and H- attaches itself to the carbon with lesser hydrogens. In the following two steps also, till all the Hydrogens get replaced by alkyl agroups, RBH+ R2B+ are positive and H- is negative. So, the addition is in accordance to Markovnikov's rule.The steps of the reaction are: 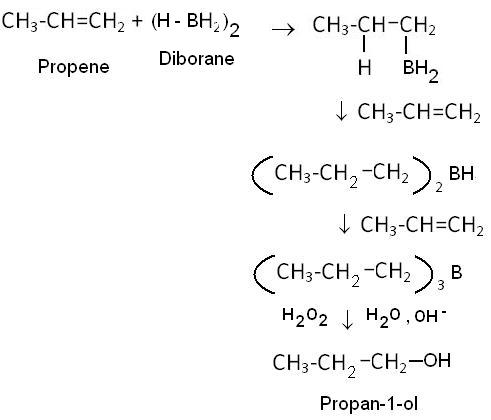