How does the windmill and dam help to produce electricity?

The kinetic energy possessed by fast flowing water is called as hydro energy. This energy is used to generate electrical energy.

The river water stored in dams is carried through pipes to the turbine. When the water flows down, its potential energy is converted into kinetic energy. 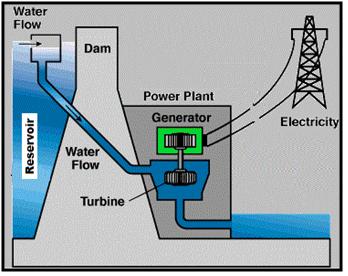 The water falls on large turbine wheels which is connected to the electric generators that produce electricity and is called hydro electricity.

1. Hydroelectric energy is a renewable source of energy as the water on earth will keep flowing for a very long time.

1. Dams can be constructed only in certain areas.

Air in motion is called wind. It is used as a source of energy to produce kinetic energy that is used in windmills.

A windmill converts convert kinetic energy into electrical energy by means of vanes called blades. These blades are connected to a drive shaft that is connected to an electric generator. The rapidly spinning shaft drives the generator to produce electric energy. As the blades turn, it turns the drive shaft and creates electricity. Electricity is thus sent through wires and collected.

It can be used for variety of purposes: