Explain the working of a gear system??

A gear is a wheel with teeth around its rim. A gear system has two gear wheels. Each gear wheel is mounted on an axle which rotates at a speed. The gear wheel closer to the source of power is called the driver or the driving gear, while the gear wheel which receives motion from the driver is called the driven gear.
Each tooth of the driving gear acts as a small lever of Class I and pushes the tooth of the driven gear one after the other to rotate the driven gear.
If the two gears make an external contact then both the gears rotate in the opposite direction. On the other hand, if the two gears make an internal contact then the gears rotate in the same direction.
A gear system is used to increase or decrease the turning effect of a machine i.e., if driving gear is rotated at a certain number of rotations per second the driven gear as desired can be rotated at more or less number of rotations per second.

In the above fig, the driving gear A is bigger and has more teeth than the driven gear B. When gear A is rotated clockwise the gear B rotates anticlockwise but at more number of rotations per second.
Two gears in external contact: 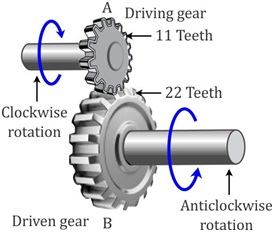 In an internal gear, one wheel has teeth on its inner surface while the other on its outer surface. They both rotate in the same direction.