differentiate between ohmic and non ohmic device and also give examples?

Ohm’s law states that‘The current flowing through a conductor is directly proportional to the potential difference V across its ends, provided the temperature and physical conditions of the conductor remain the same’.

The device which follows ohm's law for all voltages across it is called as an ohmic device(i.e under constant physical conditions such as temperature, the resistance is constant for all currents that pass through it). For such devices, a graph plotted for the potential difference V against current I is a straight line, and the value of resistance R is the same irrespective of the value of V or I.
Examples of ohmic devices are : a wire, heating element or a resistor. 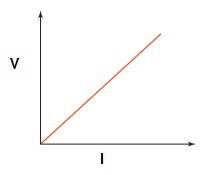 The device that does not follow ohm's law is known as a non ohmic device (i.e the resistance is different for different currents passing through it).For these devices, the graph plotted for the potential difference V against current I is not a straight line, but it is a curve.
Examples of non ohmic devices are: thermistors, crystal rectifiers, vacuum tube,tungsten ﬁlament etc. 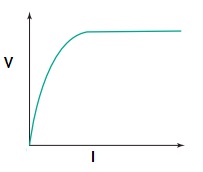