Deduce the theory of Fresnel Biprism for the determination of wavelength of monochromatic light .

Interference pattern is formed on a screen as shown in figure using two monochromatic point sources S1 and S2
which are in same phase. These monochromatic point sources S1 and S2 are obtained by making a narrow
slits that are separated by a distance d and placed before another narrow slit S that gives monochrmatic light
from the source light . Fringe width β of interference pattern which is the distance between successive bright
fringes or successive dark fringes is determined by the following equation

........................(1)
where λ is the wavelength of light , L is the distance between double slits and screen and
d is the distance between slits S1 and S2 .
Wavelength λ is determined from experimental value of β  and from known values of L and d .
Drawback in YDSE is the assumption of monochromatic sources S1 and S2 as point sources,
because it is very difficult to get narrow slits that act as point source. If we make the slit very narrow,
intensity of light decreases and interference pattern will be very faint that leads to difficulty in
measurement of  fringewidth.
This difficulty is overcome by Fresnel's Biprism experiment as explained below . 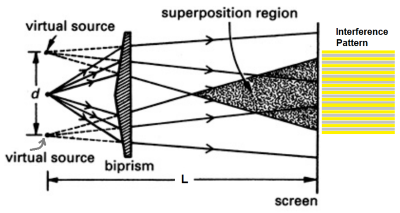 Biprism is formed by merging two narrow prisms at their base. A narrow slit is paced befor biprism
so that slit is in line with centre of biprism. A single wavefront emerging from the narrow slit is getting refracted .
After refraction , light rays merge together on a screen to form interference pattern as shown in fugure .
Refracted light rays are acting in this process such that as if they are coming from two virtual point sources of light
as shown in figure. This experimental setup is identical like YDSE where we get interference pattern from two point
sources of light that are in same phase. If we know the distance d between virtual sources, we use the fringe width
equation (1) as given in YDSE and determine the wavelegth of monochromatic light .
To determine the distance d between virtual sources we use images formed by
convex lens as shown below 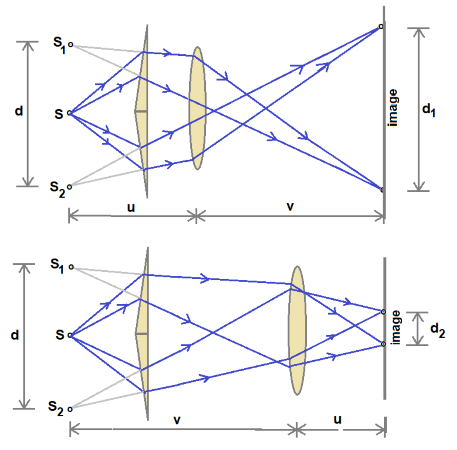 Hence , using the distance d between virtual sources in eqn.(1) and from the measured values
of fringewidth β it is possibe to detrmine the wavelength λ of monochromatic light .

ANSWERED BY EXPERT
CBSE 12-science - Physics
Deduce the theory of Fresnel Biprism for the determination of wavelength of monochromatic light .

ANSWERED BY EXPERT
CBSE 12-science - Physics
Two coherent light beams are made to interfere and produce interference fringes. If the intensity of one beam is twice that of the other, then what will be the visibility of fringes?

ANSWERED BY EXPERT
CBSE 12-science - Physics
How can coherent sources be obtained?

ANSWERED BY EXPERT
CBSE 12-science - Physics
Rays from the coherent sources reach certain point with a path difference of (3λ/2). will the point be dark or bright?

ANSWERED BY EXPERT
CBSE 12-science - Physics
How do you obtain coherent sources in Fresnel's biprism?