while there is negligible change in period of motion. Loss of amplitude is called damping .

While considering simple harmonic motion, it is assumed that there is no friction force against the motion.

oscillate indefinitely . But in real situation  , we find amplitude of these oscillations is slowly decreasing .

There are many causes for damping like friction in the oscillating system, air resistance etc.,

For undamped motion , force acting on the oscillating mass is restoring force that is directly proportional to displacement

Where m is mass of oscillating object , a(t) is acceleration that is function of time , k is force constant and

x(t) is displacement that is function of time .

For damped motion there is an additional damping force  that is proportional to velocity is acting on the system.

Solution of displacement to above equation is

when damping constant b → 0 ,  displacement and frequecy becomes that of undamped simple harmonic motion. 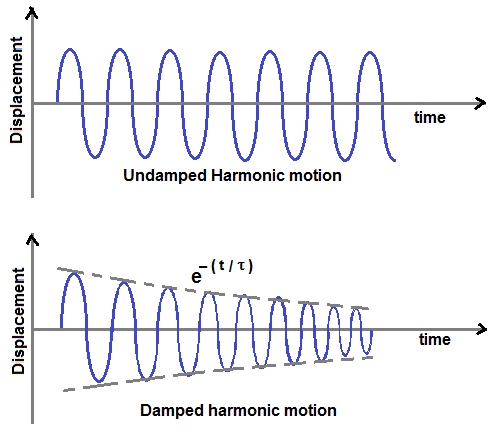